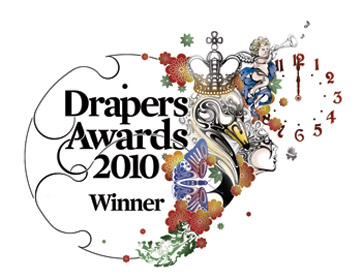 The elite of the retail fashion industry were in attendance at the Drapers Awards this evening, celebrating its 20th anniversary at the Grosvenor House Hotel in London. Excitingly Pretty Green were crowned 'Menswear Brand of the Year'.

Liam Gallagher received the award personally and commented: "Myself, Nick (Holland) and the team are absolutely buzzing that Pretty Green has won a Drapers Award; which is a massive achievement for such a young brand".

Pretty Green were delighted to be chosen ahead of big names such as Paul Smith, Boss Orange, Polo Ralph Lauren & Tommy Hilfiger. Richard Ralph, CEO at Pretty Green commented: "Pretty Green is dedicated to producing high quality pieces which focus on British-centric style and design". Richard added: "Being nominated for the Drapers Awards highlights that Pretty Green is an established player in the menswear market and is on the same level as highly respected brands".

Speaking about the achievement, Liam Gallagher commented: "A year ago I set up Pretty Green to make the kind of clothes that I wanted to wear and being recognised by Drapers today shows how far we've come. Keep the faith, beware of darkness".

Everyone here at Pretty Green would like to thank all of our customers for your continued support!