Pretty Green Features On The Cover Of This Months Drapers Magazine 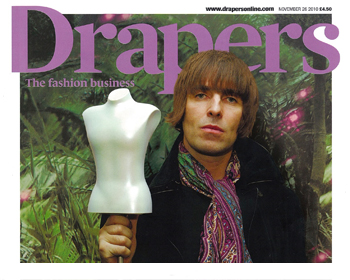 "I don't do offices mate, i'm not Ricky Gervais" says Liam Gallagher, instantly brushing aside claims by his collegues that he spends about a day a week in the HQ of Pretty Green, the menswear label he founded 18 months ago and was last week named Drapers Menswear Brand of the Year.

Instead, the Oasis frontman and Manchester icon gets involved with the design process at his kitchen table. "Me and [creative director] Nick Holland sit down at my house, and go through fabrics and styles. Nothing goes out unless i approve it", he says."I've always been interested in clothes, so to own my own label is very special."

It's an amusing image - this rock 'n' roll bad boy using his hand to finger swatches instead of flicking V signs at the paparazzi - but if Pretty Green chief executive Richard Ralph is to be believed, Gallagher's "approval" doesn't quite cove it.

"It's more collaborative than that. Liam has a strong sense of style himself, "he says. "Nick is the facilitator if you like. Liam is very meticulous about the details of things: Does the zip look right? Are the buttons right? are the colours of the buttons right?"

Whoever is resposible Gallagher, Holland or a combination of the two-Pretty Green's sophisticated cut and has silenced the sceptics who assumed Gallagher's label would just be another in a line of disatrous celebrity-led clothing brands.

Pretty Greens's cansualwear sub-brand Green Label is characterised by branded buttons and nods to the 1960s, but it's premium sub-brand Black Label is where Hollands background as a traditional tailor [he founded men's suiting brand Holland Esquire] really comes into play.

The Drapers Award is a validation of this, says Gallagher."I'm made up. it makes me feel like we are doing something right."

Mark Bage, owner of York premium independent Sarah Coggles, which does a brisk trade in the Black Label range, agrees "It is exceptionally good quality and really well designed. Nick's technical expertise means they haven't gone for a standard fit. They've really thought about who is wearing it". According to Bage, Black Label is favoured by "macho" men, whose butch frames don't necessarily suit the nipped-in waists and genteel styling of Italian labels.

It's perhaps surprising then that Pretty Green's best-performing territories outside the UK are Italy and Japan - neither of them known for the butch physiques of their male populations - but according to Ralph, Gallagher's followers in those countries "are even more committed than in the UK".

For a rock 'n' roll icon, Gallagher took a surprisingly un-rock 'n' roll route to launching Pretty Green. He and his long-standing security advisor Steve Allen had been discussing the potential for a clothing line on the 2008 Oasis tour and, when it ended, tapped up former Microsoft executive Nigel Grant to help them raise investment and assemble their dream team.

Holland was hired to focus on the product and Ralph, who as former chief financial officer at IT firm Ubiquity Software Corporation had no experience in fashion but plenty in accounting, was put in charge of steering the ship. Gallagher, who retains a majority stake in the company (remainder is split between management and unnamed investors), is the frontman.

"It's been good. Met some nice people, it moves a lot faster than music," he says of the transition to fashion.

The plan worked. Pretty Green has turned over about £4m in the 18 months since it launch, smack bang in the middle of the recession, and is currently breaking even. It expects to move in to profit next year.

About half of that revenue comes via Pretty Green's retail website, and the remainder from its wholesale business which has about 100 UK stockist, including Sarah Coggles and Selfridges, and a further 30 or so overseas.

Pretty Green is also branching into bricks-and-mortar retail. It opened it's first pop-up shop on London's Carnaby Street in July and is negotiating the leases on two more - in Manchester and Glasgow.

Overall, 30% of Pretty Green focuses on international expansion. "[I'm after] world domination. I want PG to be global without losing its roots," says Gallagher.

Pretty Green may have some way to go in India though. At a recent meeting with Tata - India's industrial giant which owns everything from department stores to lorry factories - one of the executives confused Pretty Green with fashion's other PG, and congratulated Ralph on the success of his "Philip Green menswear brand".

This would be annoying for most menswear brands, but it's perhaps a mark of success for Pretty Green to have its celebrity associations overlooked."

It will be a challenge to manage this balance between the Pretty Green and Gallagher 'brands' while chasing growth, but Ralph says the company is committed to a slow and steady approach that will allow this. This is why, for example, Pretty Green will probably not launch a womenswear, as has been widely mooted, until around this time next year.

Says Ralph: "We've had discussions but if and when we do do [womenswear] it will be a case of moving slowly, by doing a capsule collection to start with. We have had great momentum as a brand but it's very easy to drift off into popular [product] areas and lose your creative direction that way. We are keen to make sure the right time and effort will go into each item."

The naysayers had better watch out. It turns out that Gallagher, the unlikely fashion mogul, is serious about product and is in it for the long haul.