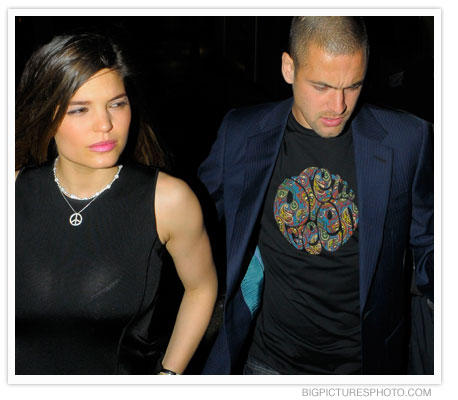 You don't have to support his team to cheer on Joe Cole. It's a fan-favourite status we can put down to his numerous pub-rousing performances for England - including that highlight-reel goal against Sweden in 2006 - plus Joe's devotion to entertaining football, as played by his idols Zinedine Zidane and Paul Gascoigne.

Unlike several of his contemporaries, 28 year-old Joe also looks sharp off the pitch - so naturally he's taken to Pretty Green ever since its launch last year. And he's a lifelong Oasis fan - as a little boy growing up in Camden, North London, Joe used to rap on the door of Supernova Heights and ask if the Gallagher brothers wanted to come for a kick about.

When we catch up with him in early May 2010, Joe's Chelsea squad are on the verge of their first double, rumours abound of a transfer to Liverpool or even Liam's beloved Manchester City, and there's more conjecture in the press about his place in the England World Cup squad. On top of it all it's only seven weeks since his wife Carly Zucker gave birth to the couples' first baby, Ruby Tatiana. So we offered some much-needed distraction, in the form of a chat about the really important things in life - like finding the perfect fitted jeans and taking care of suede.

SB: So you are now the proud owner of your third premier league winners' medal. How does it feel?

JC: "It feels great. Also it feels a relief because it's been three seasons without the title too long for a club of Chelsea's ambition."

SB: A big weekend coming up, then.

JC: "Y'know, if you'd have told us at the start of the season that we'd have to beat Portsmouth in the FA Cup Final to get the double we'd have been delighted! Chelsea has never done the double so it's a great step. If we do manage it, the only thing that separates Man United and us over the last seven years is the width of a post in the Champions League Final. To match a club like that in terms of honours is a great achievement."

SB: Is there a piece of silverware which has eluded you that you'd love to win ?

JC: "The Champions League at club level and the World Cup are the biggest. I believe I've played in teams good enough on occasions to win both but I feel we've never had ‘the rub of the green', that bit of luck you need, to do it."

SB: Do you keep all of your medals on show or are they just chucked in the loft ?

JC: "I give them all to my dad who has a huge safe in his house... so they are not on show. I would like to do that... but I think it's a bit lairy. Maybe when the career's over I will do. Need to collect a few more first."

SB: We hear it was through a pal at Chelsea that you hooked up with Pretty Green.

JC: "I'm always talking about clothes and fashion with a good friend at the club. I told him I'd found Pretty Green on the internet and how much I liked the stuff I'd got from there. It turned out he knew the guys from the label."

SB: ...And what caught your eye about the clothes?

JC: "That it's very much quality gear - I'm a big fan of good finishing on clothes, decent linings and things like that. Plus it fits me brilliantly, and it's always a problem finding stuff that fits. The jackets I don't even have to take to the tailor. Jeans for me are a nightmare - when I find a pair of jeans that fit me I wear them to the death. So I cannot wait for the Pretty Green jeans to come out, which I hear is in July."

SB: Which Pretty Green pieces will you be sporting this Summer?

JC: "I've got the T-shirt with the arty logo plus a couple of the old-school two-button T-shirts - and them, I love. When I was a kid and I wore my first suit I used to wear it with a collarless granddad shirt like that, so I was really glad that Pretty Green made them. I also love the suede shoes coming out, the Clarks desert boots."

JC: "The lightweight waterproofs - the ones like a Mac, but cut short - I like so much that I got them in the light blue, dark blue, and black. I've also got the Harrington jacket, which I have to say fits me like a glove. You can whack it on with a plain T-shirt and a little cravat and go out for dinner - then you take the jacket and scarf off and you're in T-shirt and jeans ready to take the dogs for a walk."

SB: You sound like you know what you're doing...

JC: "When you grow up on a council estate in London you've got to wear the right clothes. Especially in Camden, where I'm from - it's right next to the West End, so whenever we got our birthday money we'd be off down Ralph Lauren and Yves Saint Laurent to get our Summer shirts and stuff. At the school disco it'd be fitted jeans, suede loafers and a Ralph top. Fashion was the thing, but you don't think of it being ‘fashion' as such when you're that age, do you? It's just what everyone wore. Then, as you get older, you start developing your own style."

SB: Which for you is what?

JC: "I wear what I like - and if other people don't, then I don't care. You've got to wear what you feel comfortable in. I'm very keen to see the Pretty Green jeans because once the jeans are right you can build an outfit around them. It's a real pet hate of mine, jeans that don't fit. I'm very fussy about jeans. And my feet - they take a pounding. People step on your toes all the time, you get lots of dead skin... So you need the right shoes, and I don't think you can beat a suede loafer. The trouble with suede, though, is that you have to look after it."

SB: Have you ever worn a Parka?

JC: "Oh yeah, when we were teenagers me and all my mates wore fitted jeans, suede shoes and Parkas. We were into Oasis, What's the Story... was my first album and I went and bought Definitely Maybe off the back of that. I've been to see them I-don't-know-how-many times."

SB: Apparently you sang an Oasis song at your wedding karaoke session...

JC: "Usually at karaoke I sing Roll With It but at the wedding I did Don't Look Back in Anger.

SB: Moving swiftly back to clothes. Does anyone else at Chelsea share your sartorial wisdom?

JC: "Frank Lampard, actually. He'll never just whack a tracksuit on and rock up at training - he always looks smart. Music and fashion go hand in hand, but football and fashion, well... let's just say there's a few mistakes that've been made there. Cup Final suits, things like that..."

SB: Congratulations to you and Carly for your first baby, Ruby Tatiana.

SB: So you've got the paparazzi camped outside your house right now?

JC: "I don't think you ever get used to it. I'm not entirely comfortable with the ‘fame' side of things. If I could play for Chelsea and be anonymous, that'd be an ideal world. Having said that I like to live my life normally, and if people want to stop and have a chat I will. There's only ever a problem when people have had a drink. I do drink in the off-season, but normally I'm not a big drinker, so I'll be there in a bar having a cup of tea and drunk people'll come up. That's the only time I can get a bit indifferent."

SB: Before we let you go - what are England's chances in the World Cup?

JC: "I think England have got a good chance. Spain are obviously the favourites, but I've heard that Torres and Xavi are doubtful for the World Cup, and if you take the world's best centre-forward and central mid-fielder out of the squad that obviously weakens them. Then there's about nine or ten other countries for whom there's not much in it. The team that wins it is the team that gets a little bit of luck at the right time, and they'll get some nice football going - tournament play is all about finding the right rhythm. World Cup winners start slow and get better and better. Apart from Spain at the last Euros who started like a house on fire then sped up even more."

SB: Thanks enormously for your time during this period and all the luck in the world with everything you've got going on in the next few months.

JC: "It's honestly a pleasure. Thank you."

Steve Beale's been Style Director of FHM, Senior Editor of Arena and Editor-at-Large of The Face. He also writes about menswear for The Times and Sunday Times.