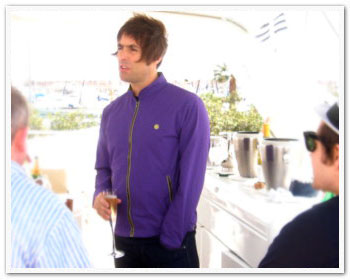 Based on the book of the same name, a word-of-mouth smash by Sixties face Richard DiLello, it’s a film about the Beatles – but like none you’ve ever seen before.

DeLillo worked for Apple Corps, the Fab Four’s corporation that they described as "an attempt at ‘Western Communism'."

A young American backpacker, DeLillo was employed (sort of) as the Apple Corps’ ‘House Hippy’. While his job description involved little more than skinning up, he also played muse and assistant to Apple Press Officer Derek Taylor. It was a position from which DeLillo witnessed some of the most pivotal moments of late 60s counter-culture. The Beatles themselves appear only as semi-mythical figures – The Longest Cocktail Party is more the story of the enormous impact the band had on the world around them rather than a biopic of John, Paul, George and Ringo themselves.

The Longest Cocktail Party has been called ‘the only book about the Beatles that’ll make you laugh’. Peppered with the hilarious and poignant details that a writer only gets from really being there, it’s Let It Be meets The Thick of It.

The film is currently set to go into production in early 2011.