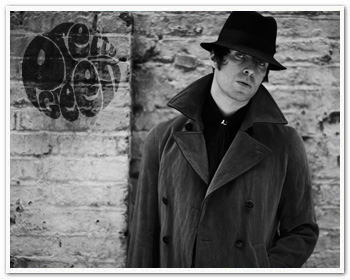 He was voted 'The Greatest Front Man of All Time' by Q magazine earlier in 2010. But Liam Gallagher's no longer merely an iconic rock star. His menswear label Pretty Green has clobbered naysayers with its first three collections. Hard-to-please London fashionistas are reported to be 'pleasantly surprised' indeed some 'very impressed'. Moreover, customers have voted with their wallets on Pretty Green's combination of high production values and classic looks spun with street-style acumen.

Liam has also found time to announce his first movie production. The Longest Cocktail Party which is a "behind the scenes movie" of The Beatles no less, adapted from the word-of-mouth smash book by former Apple Corps 'house hippie' Richard DiLello. And as if that's not enough he is currently in the studio working on a new album with his band Beady Eye.

One year on from the original launch of Pretty Green on June 4th 2009, I met up with Liam at one of his preferred Hampstead watering holes to get his own impression of the last twelve months - and find out what he's planning for the coming year.

Has it been a hectic period since you started Pretty Green?

"Not for me mate, not hectic one bit. It is for other people. If it was hectic I wouldn't be doing it. It's been a good year, man."

Was it a surprise, Pretty Green taking off quite so quickly?

"I'm liking the way it's expanding and all that - it's been great and people seem to like it, the clothes and everything. But am I surprised..? No. Without sounding like an arrogant fucker, no I'm not. Because it's good, isn't it? And people like good things."

True, do you feel the pressure to produce collections that are expected twice yearly, as opposed to albums that are only due once every 2 years or so?

"Not really... You'd have to ask everyone else, It's not hard for me. It's a buzz isn't it man? Making new clothes. It's not hard for me pointing out things, saying 'Yes' or 'No' and 'Do it this way', bringing my ideas to the table. But I'm sure it's hard for the others at times."

What new designs can we expect?

"We've got footwear coming out - pumps, desert boots, jeans, you know - as usual with a twist. Some top jackets, like Steve McQueen used to wear. All sorts, something for everyone - shorts for the summer..."

And what items have been the most successful of the three collections to date?

"Everything man. The parkas were obviously popular but the big logo T-shirts, the polos, monkey jackets, everything does well. It's all popular man."

Sounds like you guys have been very busy, How many people are working for you on the brand now?

"I haven't got a clue man. But every time I look we've got someone new. Last time I checked it was around 30."

Your website receives very flattering comments from Pretty Green customers all over the world. Was a good website an important element for you, being someone with a global fan base?

"Yeah, without a doubt. Everything's important. Pretty Green, the whole package, it's the real deal. And that's why it's important to make sure everything we do is done right. The website's great, I'm proud of it and it looks good."

How many countries do Pretty Green sell to now?

"The last time I checked it was over 80 countries now, so a little birdie told me."

That's rather impressive for a company only 12 months old.

"Yeah, I suppose so. But we've only just started."

Which countries are currently your biggest customers?

"The UK has always been very strong, but Japan, the US, Italy and Germany are doing great. Come to think of it, Scandinavia is as well."

And in the UK what are the main stores stocking Pretty Green?

"Selfridges, who are increasing Pretty Green's space this September to make it even bigger, Cruise & Xile in Glasgow, Sarah Coggles in York, and Psyche in Middlesbrough."

What about your own Pretty Green store?

"Definitely man. We're just waiting for the right place to come along, and I'm not gonna rush into it. We're looking to do a temporary store in London this summer, the website will tell you where and when it's happening..."

In addition to the long list of movie stars, rock icons, DJs and TV presenters already wearing Pretty Green, a number of this year's World Cup footballers have been spotted sporting the label - namely England's Joe Cole and Jermaine Defoe plus key members of the Italian squad who are said to be huge fans of the brand. This is an amazing accomplishment for a label that's only a year old. What do you put your success down to?

Joe Cole is clearly a big fan of the brand, would you be happy if he signs for Man City?

"Yeah, I will. I think Joe Cole is a top player. He can always turn the game around, d'you know what I mean? So, yeah, I'm having him man. He's got a lot of energy."

Are you glad he is part of the England Team?

"I am glad Joe Cole was part of it and I'm glad Shaun Wright Phillips is too."

So you are going to be stuck to the TV when the World Cup is on?

Paul Weller - himself a style icon to more than one generation - wore a Pretty Green suit onstage during his five-night, sold-out, run at the royal Albert Hall in May. He stated here on Pretty Green News that he's going to work on some designs of his own with Pretty Green. Will this open the doors for others to follow or is this something that you will strictly control?

"Well... We will definitely control it, but yeah... I mean, I know Liam Howlett from The Prodigy. He was talking to me the other night about maybe doing the same kind of thing. We'll see how it goes. The ball's in their court. But it's good that Paul Wellers' doing it, 'cos he's cool and he's into his stuff. It's got to be the right people."

Moving on what else have you been up to other than the fashion stuff?

"I've been recording our fantastic new record with a musical pop combo called Beady Eye, sorting out the film, and working on Pretty Green's new designs."

Busy then! I hear you even manage to find time for running?

"Yes, I'm a keen runner. Every morning man. Got to be done."

The film's a strong concept, how did you come across it?

"Someone gave me the book ages ago and it was always knocking around our tour. I read it over and over. Couldn't stop reading it. One of them books you can't put down. And I just thought: "There's nothing else to do, now Oasis have split up I can do what I want."

Yoko Ono is clearly a fan after her recent comments. Have you ever met her?

"Yep, met her once. She invited me round to the Dakota building. Had a lovely day and I'll never forget it, great woman."

You must have some amazing stories from your many years on the road, do you ever envisage doing a book or film about them?

"Yep, without a doubt. Very soon. Before I forget them all."

So you've just got back from Lake Como for Andy Bells wedding how was it?

You guys all seem very close Andy, Gem, and Chris?

So when you do get time to relax at home in front of the TV what's normally on?

"The usual shit, Eastenders, Coronation Street, I can't wait for the World Cup to take over on every TV in my house. I like that Pineapple Dance Studios as well. That Louis dude, he reminds me of Noel."

I hear your brother Paul is involved in the new movie production company?

What exactly will Paul's role be?

What are your most vivid memories as a kid growing up?

"Just fucking about in the park playing football, really man..."

What do you think is different now for kids from when you were growing up?

"Everything's different now. They've got it all haven't they? You don't see many out in the park playing, or in the streets, they're just all indoors staring at screens. I'd hate to be a kid growing up today. It's fucking soulless."

Any plans for a holiday this summer ?

"I'm not going on holiday this year. Staying at home and watching the World Cup."

Thanks for your time Liam.