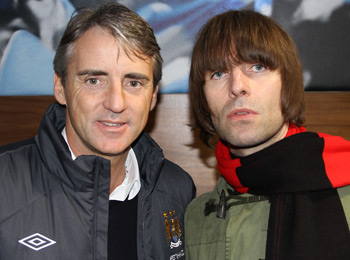 Liam Gallagher took a seat at the City of Manchester Stadium last night to watch the FA Cup 3rd Round Replay between Manchester City and Leicester City.

After initially drawing the first leg 2-2, the replay did not disappoint, ending 4-2 to the home team. The pick of the goals, a great solo effort and unstoppable shot from Carlos Tevez.

At the final whistle Liam took some time to answer questions and also meet the Manchester City manager Roberto Mancini. Manchester City will now travel to Meadow Lane to face Notts County in the 4th Round of the FA Cup.

The full image of Liam and Roberto is available to view on our Facebook page: