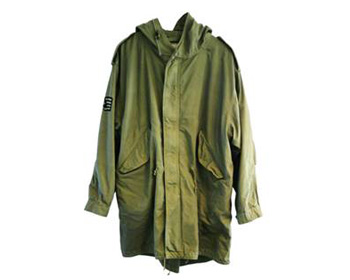 Pretty Green‚ Liam Gallagher’s clothing label is proud to announce its collaboration with the reissue of The Who’s ‘Quadrophenia - The Director’s cut’.

To mark the collaboration‚ Pretty Green has designed a limited edition parka made legendry by ‘Jimmy’ from the Quadrophenia album cover. The album tells the tale of a young mod and his struggle to come of age in the mid-1960s.

The parka has been an iconic image since the album was released and Pretty Green are excited to revive it. Only 100 are being made and are priced at £500. They will be exclusively available from the Pretty Green Carnaby Street store.

Liam Gallagher says, ‘As I’m a massive fan of The Who, and Quadrophenia being one of my favourite albums of all time, it’s an honour to be associated.’

Pretty Green are also showcasing Pete Townshend’s archives of notes, desk diaries, photos and original lyrics from the making of Quadrophenia alongside album artwork and outtakes in a never been seen before exhibition at our flagship store in London’s Carnaby Street. The exhibit opens to the public on Thursday 27th October, this is a once in a lifetime opportunity to get up close to Pete Townshend’s work and his inspirations behind the making of the seminal album.

The Quadrophenia (Super Deluxe Edition) is set to be released on 14th November.