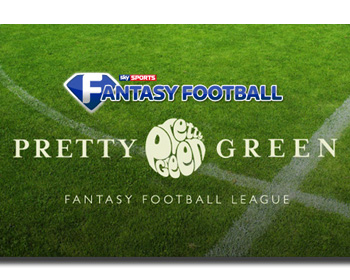 Congratulations to Andrew Dolphin Rolwand, manager of 'flippers flops' who stormed to victory in game two, picking up £250 worth of Pretty Green vouchers.

Runners up in this game month were 'gortins team' and 'The Shy Tall Knights' who scooped up £150 and £100 in Pretty Green vouchers respectively for their 2nd & 3rd positions.

Despite Liam's new look strike force of Van Persie & Sergio Aguero blasting him up the league 1350 places this month, Liam is not resting on his laurels and is promising another shake up this month, with the focus being on defence and midfield.

With the new game month underway, two of the league's founding members go head-to-head when Liverpool host the high flying Man City. Miles Kane & Liam give us their predictions on the big match:

Miles Kane says: "I predict 2-0 top the pool, Suarez with both. First one penalty. Ballsy shout to say two nil but got that felling inside!. Kane 1 Gallagher 0!"

The next game month has already begun and runs through until Sunday 27th November, when the prize will again be Pretty Green vouchers - Sharpen up that team selection and get ready for action!

With new prizes available every month, now is the perfect time for new members to join, so spread the word - Pretty Green Fantasy Football is the only rock n roll option!