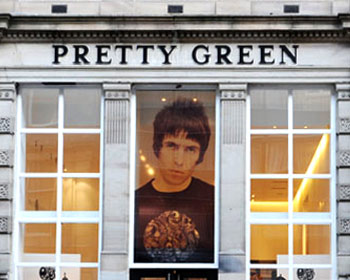 Mark, Tom, Pete & Neil have all kindly given up their time to promote the Pretty Green Teenage Cancer Trust tee which was released earlier this week. All profits (£20) from the sales of the limited edition tee, pin badge and poster set will be going to Teenage Cancer Trust.

Tom played 304 games for Celtic between 1990-2001 picking up 3 SPL titles and captaining Celtic to their first league title in 10 years in 1998. Tom was awarded an MBE in 2002 for his contribution to Scottish football and is currently the manager of U-17 Celtic team.

Glasgow born and raised singer/song writer Pete Macleod will also be appearing in-store on the same day. Pete who donated all of the proceeds from his new track ‘Rolling Stone’ to Cancer Research UK will be playing a 20 minute acoustic set.

Neil, who has been around the scottish music scene since the early 90s, is currently working on his second solo album 'Geography and Luck'.

Mark and Tom will be in-store from 3pm & Pete will kick-off his acoustic set at 3.15pm followed by an acoustic set by Neil.