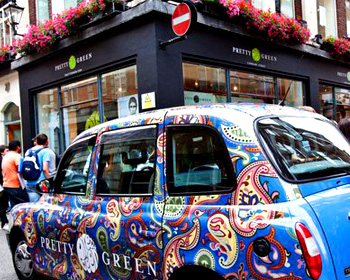 To coincide with the Beady Eye gig at the Royal Albert Hall in aid of Teenage Cancer Trust, Andy Lewis and Arveene will be playing DJ sets in our Carnaby Street store on Thursday 24th March & Friday 25th March respectively.

Andy started DJing in the late 1980s and established himself as an expert in his chosen musical field amongst national and global audience. In spite of Andy’s growing fame as a DJ, his first love was making music and he has gone on to release two solo albums and collaborate with Paul Weller.

Andy has since played bass on Paul Weller’s acclaimed albums “22 Dreams” and “Wake Up The Nation” and toured extensively as part of Weller’s live band. Andy has recently released a mini album called “41” which is available to download from iTunes and available to purchase on CD & Vinyl via Acid Jazz. Andy will also be playing an exclusive live show at the Bowery in New Oxford Street on April 6th.

Andy Lewis will be DJing in-store on Thursday 24th March between 5 - 6pm.

One of Irelands most respected & versatile DJ’s, Arveene has remixed and worked with artists such as Mr Ozio, Nightmares on Wax & The Prodigy. He has recently been running special events around the world, bringing some of the biggest names in to the smallest venues around the world including David Holmes, Andy Weatherall and Beady Eye’s own Andy Bell.

Arveene will be DJing in-store on Friday 25th March between 5 - 6pm.

All are welcome, so make sure you head to store to hear some classic and contemporary tunes!

Tickets are still available to see Beady Eye at the Royal Albert Hall in aid of Teenage Cancer Trust on Friday 25th March 2011.