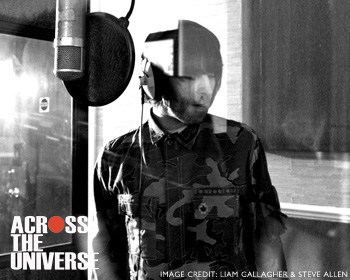 Beady eye have announced they are releasing a cover of The Beatles' 'Across The Universe' which they performed live during Sunday Night's Japan Disaster Benefit at the Brixton Academy, London.

The concert also featured The Coral, Graham Coxon, Paul Weller, Kelly Jones, Primal Scream and Richard Ashcroft. Beady Eye closed the show with their first ever performance of 'Across The Universe'.

The day before the charity event, during an 8 hour session, Beady Eye went into RAK studios to record and mix their version of the song from The Beatles' 'Let It Be' album. The band have today made the track available for a limited period to download through their website.

All proceeds from the sale of the track after VAT, credit card fees and mcps, (62p) will go directly toward the British Red Cross Japan Tsunami Appeal.

Due to the Japanese Earthquake and Tsunami, Beady Eye have been forced to reschedule their Far East tour of Japan & South Korea. The band will be rescheduling there sold out tour of Japan and their debut gig in Seoul to take place in September.

Beady Eye are set to perform on ‘Later…’ on BBC2 in the UK. The band will perform on the first episode of the new series and will be joined on the show by Elbow, Anna Calvi, Raphael Saadiq and The Tallest Man On Earth.

The show will air live at 10pm on Tuesday 5th April, then repeated with extra performances at 11:50pm on Friday 8th April and Sunday 10th April at 12:30am.

The show will also be available to view for a limited period on the BBC iPlayer for fans in the UK.