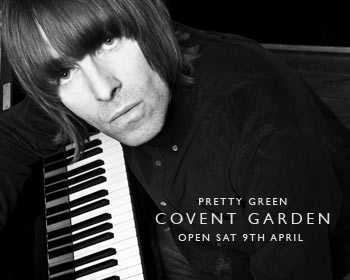 Following on from the huge success of the Carnaby Street store, Liam Gallagher’s Pretty Green label is openings its second London pop-up store in Covent Garden.

Opening to the public on Saturday 9th April, Liam Gallagher will officially launch the store on the 19th May. More details on invites will be announced shortly on our Facebook page.

Located in Covent Garden’s iconic East Piazza, on the Royal Opera House Colonnade the store is located on one floor with 1,914 sq ft of retail space.

Pretty Green draws its inspiration from the art, music and culture scene of the 1960’s and is renowned for its attention to detail with an emphasis on quality fabrics, cut and classic tailoring.

Since launching in 2009, Pretty Green has gone from strength-to-strength and now has four stores, including Carnaby Street, Manchester and Glasgow.

Liam Gallagher says: "I’m made up to be opening our fourth store in Covent Garden, it’s a perfect location for Pretty Green."

The new store will house both the Black and Green Label collections and feature iconic imagery from Liam’s latest shoot for the Pretty Green’s S/S11 collection.

As with each of the Pretty Green stores, Covent Garden will focus on providing monthly live music from a host of established and unsigned bands.