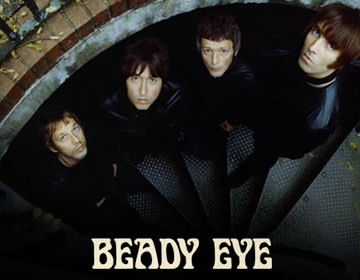 Beady Eye have announced they will release the third single, 'The Beat Goes On’ from their debut album 'Different Gear, Still Speeding' on 11th July. The single will also feature the recently record b-side ‘In The Bubble With A Bullet’.

The limited edition and numbered 7” will be available to pre-order exclusively through the Beady Eye Website. A standard version of the 7” will also be available to purchase through select retailers from 11th July.

Beady Eye head to the US

Beady Eye will be heading out to the US for their debut shows in June as well as making a special guest appearance on The Late Show with David Letterman in New York. You can win tickets to see Beady Eye Live on Letterman by entering your details HERE.

The band will also be marking their first trip to South America in November when they perform in São Paulo, Brazil. Tickets are available to buy now. Further South American dates will be announced soon.

The rescheduled dates for Beady Eye’s debut Japanese tour have been announced. Fans may recall the band were forced to reschedule the tour, originally planned for May, due to the affect of the earthquake which struck the country in March.

Beady Eye were among several acts to appear at a recent fundraiser for the Red Cross Japanese Disaster Benefit at the Brixton Academy which raised £163, 262 for the relief effort. A Japanese flag that was signed by many of the performers including Beady Eye also went up for auction, which raised a further $7,398 for the cause.