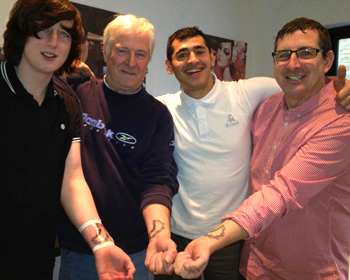 The tee featured an iconic 12 colour illustrated tambourine which Scott (furthest to the right) had tattooed onto his forearm in aid of the charity. Inspired by the hard work and care that the TCT provides, Scott made the decision to do his bit to help out.

Speaking about the fundraising Scott said: "We had a great time doing this and hope it will do some good." Scott wasn't the only one to get the memorable tattoo, his son Niall and father Bernie (1st & 2nd from the left respectively) also joined the cause and had the replica tambourine tattooed on to their arm.

With a target to raise £1,000 for the charity, the guys are currently at around £600. If you would like to sponsor Scott & donate to the Teenage Cancer Trust Click Here.

Congratulations to Scott, Niall & Bernie for all of their fundraising efforts, keep up the good work!