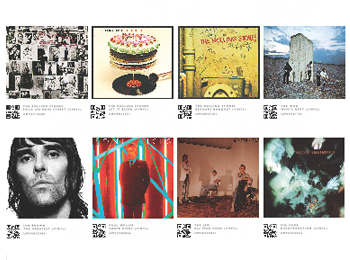 While the number of independent record stores in the UK has fallen in the last decade, vinyl is enjoying a resurgence with many music fans collecting vinyl LPs and singles alongside their digital music libraries.

Open 24 hours a day via the windows of all the Pretty Green high-street stores, the virtual vinyl outlets will initially feature a dozen titles ranging from The Rolling Stones’ Exile On Main Street to Elbow’s Seldom Seen Kid and Ian Brown’s The Greatest.

Shoppers will be able to instantly buy the vinyl records through the Simply Tap app. Once first-time customers have downloaded the app (available in both the App Store and Android Market) and securely registered their details, they will be able to make an instant purchase through their mobile handsets, with the albums arriving directly to their preferred delivery address soon after.

Speaking about the virtual record stores, Pretty Green’s Brand Director Nigel Grant said, "As music is a large part of Pretty Green’s heritage, the collaboration with Universal Music and Simply Tap™ is in perfect synergy with our brand values."

"Through our label we strive to bring style, culture and music from past decades firmly into the future. We feel that by providing the virtual vinyl outlets in store is a further complement to our brand and ideals."

Mobile Money Network Managing Director John Milliken said, "Our instant mobile checkout allows shoppers to buy what they want, when they want it. People walking past the Pretty Green store window will be able to instantly buy vinyl records 24 hours a day, seven days a week and have them delivered to their preferred address."

The full list of titles available in the virtual stores are:

The virtual vinyl record stores will be available in the windows of all the Pretty Green stores from Thursday 24th May until Sunday 10th June.