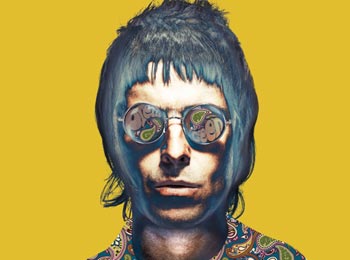 To celebrate the British Fashion Council's London Collections, Shortlist Magazine has designed three limited editions covers to front their style specials. Knowing a man who is clear of his sartorial choices, Liam Gallagher was naturally asked to submit his own design.

Shortlist Magazine recently caught up with Liam to talk through the ideas behind his psychedelic cover, the meaning of British style and what's next for Pretty Green.

SM: So what is the idea behind your cover?

LG: "The cover was inspired by the psychedelic portraits of The Beatles taken by Richard Avedon in the late 60's, which I’ve got hanging in my house. I wanted to create something that had the same vibe and also used the paisley logo that we created for Pretty Green."

SM: How did you go about putting it together?

LG: "I worked on it with the graphic design team at PG and this one jumped out the minute we did it."

SM: What does British style mean to you?

LG: "British style for me is a look back over the decades especially in the 60’s where lads were buzzin and defining their style and where bands like the stones and the Who were creating their own classic look. Take album covers from the Kinks to The Small Faces they all had a clean smart British look that made a statement. It’s all about iconic classic pieces like the Parka or the Trench which epitomise British style. I try to capture a bit of that in what I do with Pretty Green. Fashion and music will always go hand in hand and that has a major bearing on the Pretty Green designs."

SM: What are your personal style rules?

LG: "It’s about the look and whether I personally like it or not. I’m into quality clothing with a vintage vibe. Pretty Green is a reflection of my personal style and taste, one foot in the past one foot in the future."

SM: What is your worst fashion mistake you’ve made?

LG: "Its not for me to point out, I’m sure there’s been a few mistakes but overall I’m cool as fuck!"

SM: Who is your all time style hero?

LG: "Anyone who wears what they are told to wear and not what they want to wear, you know the ones who have stylists, if you don’t know what you look good in then I feel sorry for you."

SM: Give us a guide to looking good on-stage? What are the essentials?

LG: "For me it’s starts with the shoes and then work you’re way up."

SM: What next for Pretty Green??

LG: "We are opening a new store next week in Leeds which will be our 11th in the UK, and then our first international store in Tokyo which opens at the end of July just before the mighty Beady Eye play Fuji Rocks, it gunna be mega we are having a big party on the Wednesday if your in town and you’re not a clown then you’re invited!"

You can head over to our Facebook page HERE to check out Liam's cover design.

Look out for your copy of Shortlist Magazine this Thursday or read it online HERE.