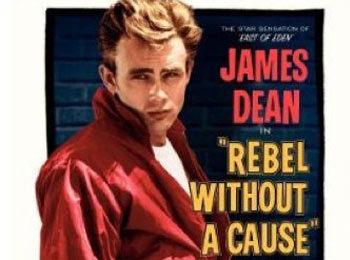 The transition from Summer into Autumn can be a bit of a tricky time of year for clothing. The weather can be deceptive and it's not always easy to know what to wear when we venture outside. It may look clement but its just as likely to turn chilly or drizzly. Or both.

The PGM has a few tricks up his impeccably tailored sleeve that might just help. Light weight outerwear is an obvious solution but what are the options? For me the Harrington is always the go-to transitional jacket of choice. A staple of any sartorially minded bloke's wardrobe, this inherently British zip fronted, blouson jacket has a long history of popularity, from the streets and the skinhead culture of the 60's and 70's, to the silver screen, as sported by the likes James Dean in Rebel Without a Cause and Steve McQueen, on and off the set.

Originally developed by Grenfell of Bury in the early 1930's and refined in 1937 by Baracutta as the eponymous G9, it has remained virtually unchanged to this day. It's generic name actually comes from a character named Rodney Harrington, played by actor Ryan O'Neal, in the 60's US television soap opera: Peyton Place. The Breaking Bad of it's day. The Pretty Green version is cut beautifully and boasts a lining in the now famous Vintage Paisley fabric, one of the key indicators of the quality associated with the brand. It's light to wear but'll keep out the chill and hold off a shower. Perfect until we have to search out the real winter clobber, more of which another day. For inspiration on styling take a look back at images of mods, skinheads and even the two tone period. The PGM likes to wear his over a checked button down shirt or a tipped polo, with perhaps the addition of a high V neck sweater or a cardi as the season wears on. Another excellent choice for the autumn is the 4 pocket Dispatch jacket. Styled after traditional waxed-cotton versions for motor cyclists and made popular by British companies such as Belstaff and Barbour in the early 20th century, this hip length outdoor jacket when made from a light weight fabric works perfectly almost up to the end of the year when the real weather kicks in. Because of it's length and it's high neck and in some cases a hood too, all of which work to keep out wind and rain, versions of this style of jacket became very popular on the football terraces of Britain through the 80's and 90's. The iridescent or "tonic" fabric (two colour tones over-lapping each other to create a pearlised or shimmering effect) on PG's AW13 version is an homage and a nod of appreciation to a particular Stone Island jacket which became the terrace jacket of aspiration during that time. Their's was crafted from a fabric that utilised tiny glass beads to create an amazing reflective surface, called "liquid reflective" material, which worked in the much the same way as "cats eyes" in road surfaces. In those days it would have cost the average British working lad around a month's wages. Luckily PG's one weighs in at under a ton. Sweet!

Keep it stylish gentlemen.
The PGM.