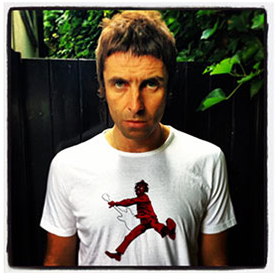 Have you seen the new, highly collectable Teenage Cancer Trust T shirts yet? If not check them out on-line. Three great British Rock guitar legends, depicted in their own trade mark playing stance, all looking rather "rocked out", designed by the great British artist Jamie Hewlett of Gorillaz and Tank Girl fame.

The classic crew neck jersey T shirt, though historically an under garment, is another one of those iconic pieces of clothing, which worn a certain way can bring instant cool to many different looks. Traditionally the plain white T, worn under a black leather jacket or worn alone, perhaps with a pack of smokes rolled up in the cuff, symbolised a bad boy attitude. In the 50's they began to appear dyed and coloured up. Black and red being the most popular. But the T shirt has evolved into something else entirely. It has become a message board and a strangely powerful one at that. With the advent of screen printing, logos, images and wording were added turning the basic T into a tool for both self expression and for making clear and easily understood statements, from the humorous, through the musically inspired to the political.

There must be literally hundreds that have passed into the archives of modern awareness, loads that we all know and would instantly recognise.

The Che Guevara T, (originally from a piece of art work by Irish artist Jim Fitzpatrick) has been part of popular culture and a mainstay of the student wardrobe for decades. Jamie Reid's God Save the Queen, with it's ransom note type plastered across the face of the Queen and made to promote The Sex Pistols (sold through Vivienne Westwood and Malcom McLaren's Kings Road shop Seditionaries, with an original fetching probably somewhere around a monkey these days).

And what about Peter Savilles's cover for Joy Divisions Unknown Pleasures album (Fact10 for aficionados) A simple series of wavy white lines on a plain black background, (actually a visual representation of the sound waves of a pulsar in deep space... wow) and an instant classic T shirt.

The list could go on, so many cool pieces with so much added to the rich cultural seam where fashion and music hang out together. So quick! Grab one of the Pretty Green/Jamie Hewlett TCT T shirts's while stocks last. You'll be helping others and bagging a future classic at the same time. No brainer!