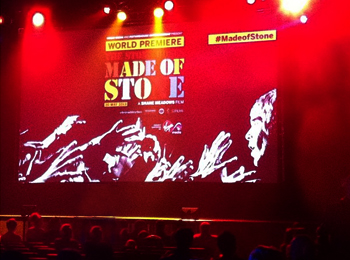 Here at Pretty Green HQ we’re all really excited about the forthcoming launch of the Stone Roses ‘Made of Stone’ documentary. Not least because Mani is wearing several custom made Pretty Green pieces in the gig footage. We’re all big fans, some of us were at Spike Island and others just discovered them because we appreciate great music.

We got sent some invites to the official premier last night at the Victoria Warehouse, Manchester. The film, which was introduced not only by Shane Meadows but The Stone Roses themselves (minus Reni who was ill), will launch nationwide on 5th June. The queues were massive but it was worth the wait.

Once in we were met with a sea of Manchester’s finest diehard fans, a fair few dressed smart in Pretty Green. Edith Bowman introduced and interviewed Shane meadows and the producer, who in turn introduced the band members to a standing ovation. There was an incredible atmosphere with an appreciative audience cheering at every opportunity! The screening was followed by the after party which was as you'd expect it to be and then some.

'Made of Stone' is a skilfully crafted and cut documentary which we can’t recommend enough. It provides a true insight into what went on behind the scenes with one of Britain's finest rock groups. Get down to your local cinema and check it out.