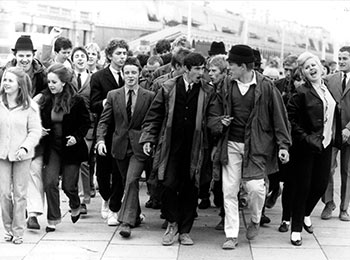 Everything we do, every piece of clothing we make, has a direct reference back to something actual from Rock and Roll history. A gig, a recording, an album cover. A moment in time, related to music, captured, recreated and re-imagined in clothing. It works because it's real.

In one of the short films from the early days of Pretty Green, Liam, in his PG parka, shot in black and white and walking through The Grand Hotel in Brighton, talks about the parka and the role it played in understanding the power of clothing. He describes rocking up to a Stone Roses gig in Blackpool, sporting a yellow corduroy Yves St Laurent parka that his aunty had liberated from the coat check of the club where she worked, and feeling heads turn towards him as he moved through the crowd and the realisation that, at that moment, he was The Face. That's what Pretty Green is all about. That very real link between music and clothing.

So. The Parka, a classic piece of mod clobber, Brighton, the setting for the infamous clashes between Mods and Rockers in the 60's and the inspiration behind The Who's Quadrophenia album from the 70's, the images from which inspired Pretty Green's first collection. Then there's the Stone Roses (not to mention Oasis) and their part in the whole Madchester period and Rave culture. And let us not forget the movie that was made of Quadrophenia and it's part in the Two Tone movement of the 80's, which in turn fed Britain's on going love affair with reggae. Spanning several decades and still alive today, the M-65 US Military issue all weather coat has been there and seen it all.

I guess, what I'm trying to say is...it's a rich, intricate, fantastic, inspiring, rock and roll sort of world where music and clothing meet and interact, and at Pretty Green… we live and breath it!

In this occasional but (hopefully) informative series of short entries we intend to delve into this rich heritage and endeavour to bring tales of enlightenment and interest relating to the relationship between these two fascinating worlds to a discerning reader. Please feel free to make suggestions on any points of interest you feel might benefit from a bit of fun introspection