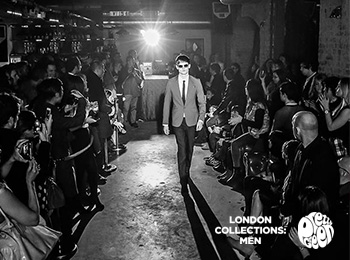 Tuesday 7th January saw Pretty Green host another exclusive event as part of LC:M. This is the third season Pretty Green has been involved and this was definitely something unique. Held at the Beat Club, once frequented by the Who and John Lennon, it made for the perfect rock and roll venue. With a queue round the block before kick-off it was set to be a big night with expectations of a great evening ahead.

Showcasing the best of A/W 14 from the collection ‘The Audition’ models took their best foot forward in a selection of rock inspired looks. Highlights were a reworked Harrington in black and white optical fabric. There were signature faux fur trimmed parkas, reworked leather jackets, and plenty of attitude on the runway. The show stopper and finale piece was the ‘gig on the roof’ John Lennon inspired faux fur coat, not for the faint hearted! The collection scored highly with the audience which comprised of UK and International Press & Buyers and Pretty Green loyal customers.

The night was rounded off by a mega set from Clint Boon who certainly kept the crowd on their feet. Guests drank cocktails all night courtesy of Ciroc vodka and red bull editions which kept everyone in the party mood.