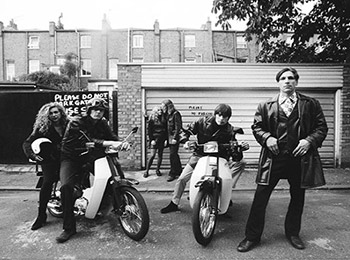 World Of Twist are the great lost band from Manchesters music history. They were formed in Sheffield in 1983 by Jamie Fry and Gordon King armed with a Casio keyboard and a Letraset catalogue. Tony Ogden answered a call for a drummer and with his arrival came a sudden sense of invinciblity, like how Townshend, Daltrey and Entwistle must have felt when Keith Moon auditioned for The Who. As Gordon says “From the minute Tony Ogden joined we knew we’d be massive”.

The band were iconic in their time and influenced a generation of rock and rollers, Oasis included. ‘The Son’s Of The Stage’ was World Of Twist’s second single from 1991 and Liam Gallagher even went on to cover it as a B side on Beady Eye’s first record.

On December 23rd 1990 the band played arguably their most famous show at Manchester’s Ritz. The decision to book the 1500 capacity ballroom just two days before Christmas had seemed an act of sheer lunacy but it was packed to the rafters. Everyone, including the young Gallagher brothers, remembers the show for its legendary opening moment when the curtains drew back to reveal a foil-wrapped Tony Ogden twinkling in the spotlights like Rob Tyner dipped in mercury! However, Quality Street was released in October 91 to lukewarm reviews. The press fanfare that had heralded their every move for over 12 months became a sudden deathly hush. The album didn’t sell and attempts to write a follow up were hampered considerably by Tony’s announcement that he wasn’t going to sing any more. Circa pulled the plug soon afterwards. Creation Records tried to sign the band but were put off by a rather inflated price tag and turned their attentions to another South Manchester five-piece called Oasis.

Looking back Gordon says “After 23 years, I still maintain the songs are fabulous. Sons of the Stage, our tongue-in cheek homage to the MC5, has broken free of its smart-arse moorings and now rocks with Detroit assurance, Sweets – an attempt to write the most horrible love song of all time – is perhaps the greatest love song of the post-punk, pre Brit-pop era”.

And several years after the album was released, when questioned about Quality Street remarked, Tony replied “We spent £250,000 making an album with the smallest bollocks in pop history. The band just fell apart. I didn't wanna sing, the guitarist didn't wanna play. When the company didn't get a hit they threw us in the bin. I was devastated - I spent four years on smack watching Third Reich movies because the good guys always win. I'm really sorry for letting our fans down...but I’d ask anyone to play that World of Twist album 20 times with every dial on full. If it doesn’t rock, come and smash it over my head!”

This release is dedicated to the memory of two giant personalities who in any other life would have been as big as their respective teenage idols David Bowie and Iggy Pop - Nick Sanderson and William Anthony Ogden.

Quality Street is available on vinyl again after many years. The heavyweight 180gsm vinyl now includes She's A Rainbow (not included on the original vinyl release) as well as the singles The Storm, Sweets and Sons Of The Stage.