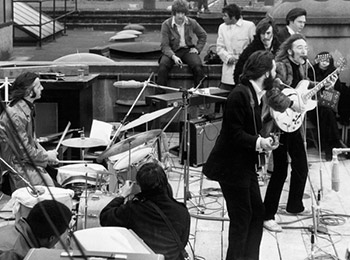 It was so cold, that as they went on stage John Lennon borrowed Yoko Ono’s fur coat and Ringo Starr wore his wife Maureen Starkeys red mac. Although only a few people could see them, people gathered in the streets below to listen and traffic came to a halt on Savile row.

“So we were playing virtually to nothing - to the sky, which was quite nice. They filmed downstairs in the street - and there were a lot of city gents looking up: 'What's that noise?'”
- Paul McCartney

In a 42-minute set, the Beatles played nine takes of five songs before the Metropolitan Police Service forced them to stop. Footage from the performance was later used in the 1970 documentary film Let It Be.

As ever, this legendary band new how to make an impact, the unique nature of this gig served as a poignant end of an era for many Beatles fans.

The concert came to an end with the conclusion of "Get Back," and John Lennon's famous statement, "I'd like to say thank you on behalf of the group and ourselves and I hope we've passed the audition.