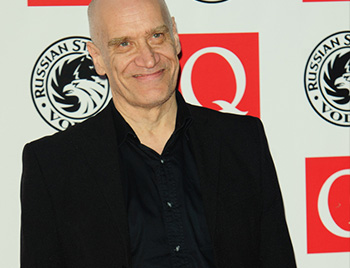 The ceremony took place last night in central London; awarding some of the best acts of the British music scene whilst also paying tribute to some legends of the industry. The award for 'Classic Album' went to Pink Floyd’s Dark Side of the Moon, 'The Inspiration Award' was given to the Scottish Rock band Simple Minds and The Charlatans received 'The Hero Award' which they dedicated to former band members Rob Collins, who died in 1996, and Jon Brookes, who died last year.

The real celebration and highlight of the night saw Guitarist Wilko Johnson receiving a standing ovation whilst picking up 'The Icon Award'. The guitarist now managed by Alan Mcgee spoke about his recent illness on the night and declared publicly that he is now Cancer-Free following an 11-hour operation earlier this year to remove the tumour. He was given only nine or ten months to live back in January 2013 when being diagnosed with Pancreatic cancer, he chose not to receive any chemotherapy and instead announced he would be embarking on a farewell tour; playing what was supposed to be his final show on the 22nd March 2013. However his love of music saw him continue on to play and appear in unannounced live sets and informal gigs in his home-town. Wilko also went on to record a farewell album with Roger Daltrey 'Going back home' which was released in March 2014.

His musical style helped establish the early years of Dr. FeelGood, one of the first influences of the British Punk scene. Wilko Johnson stands out in his signature tailored suit and his on-stage movements whilst achieving his own playing style using fingers rather than guitar picks. He was involved in what was known as the 'Pub Rockers' generation, a time where bands experimented with sound and style to deliver a mixture of 60's Hippy and 70's punk. Wilko went on to join other bands such as Solid Senders and Ian Drury's band The Blockheads. He also supported The Stranglers on their 'Black and Blue' UK tour in 2011. We think you'll agree that Wilko Johnson's career in music so far is one to be admired and truly worthy of the Icon award. This man is a true inspiration.

Other highlights of the night saw guitarist Johnny Marr being presented with the 'Gibson Les Paul Award' by Champion cyclist Bradley Wiggins and Kasabian picking up two very respectable awards for 'Best Act In The World Today' and 'Best Live Act'. Frontman Tom Meighan dedicated the awards to two 'rock ‘n’ roll survivors' – Wilko Johnson and his father, the singer went on to explain that his father had also survived after he was accidentally run over before leading the audience into a standing ovation for Johnson, saying: "This is for Wilko, God bless him."