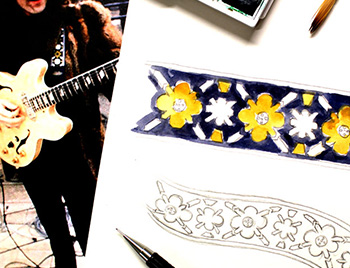 By the time the clock was ticking on The Beatles' legacy in the late sixties, the only battle they really had left was to find themselves, or more precisely, to become individuals again.

For all the talk of the band fracturing, their various solo projects around this time showed four individuals looking beyond the legacy of Beatlemania into new waters. Both musically and in terms of style their influences had become diverse, which echoed not only the spirit of the times but also their travels and spiritual beliefs.

Elements from The Beatles individual styles are echoed throughout our AW14 Black Label collection. Most notably John Lennon’s iconic guitar strap design which features under the collar of our Fur Lined Bomber, on our Desert Boots and featured as a bold pattern on shirts and Jersey.

Like the eclecticism of his music, his style in the late 60s could change daily depending on how his mood took him, but there were stand out Lennon pieces however that stand alone. His signature white suit for instance or his classic denim jacket. His thin rimmed 'tea- shade' glasses to would take on an almost iconic status too. There were also little subliminal clues to Lennon still being a traditionalist, particularly in his use of signature guitars and straps. His beloved Epiphone Casino and Rickenbacker guitars. His Vox Python and 'rooftop' straps were staple Lennon. Of all the turbulence in the latter years of The Beatles, these were pieces that never really let him down.

Their musical success may still have been their main nerve but in truth the Beatles had caused huge waves in other subcultures right from the off, particularly in fashion. Much like their output from this period however, the way they dressed in the late sixties seemed to be a direct reaction to the band being seen as a uniformed unit. They began to shed the skin of the ‘fab four’ and evolve much more individual styles.

Perhaps the biggest example of a Beatle as a changeling was George Harrison. He'd been happy to take his role behind Lennon and McCartney for a long time in The Beatles but the spiritual age of psychedelia had a profound effect on him. By the late sixties in fact, he was fast becoming The Beatles' renaissance man: a respected songwriter brimming with an artistic confidence and flamboyance. Embracing Eastern philosophy and music, he was the member of the band who seemed to most identify with the idealism of the age and dressed accordingly - paisley and floral prints were heavily featured, bright ruffled suits were a favourite too.

“By the late sixties, George was fast becoming The Beatles' renaissance man: a respected songwriter brimming with an artistic confidence and flamboyance.”

For Ringo too, the affable stick man behind the world's greatest band, and about whom Lennon had icily quipped "he isn't even the best drummer in the Beatles", there was a period of great change. The late sixties had seen his character evolve from the clown percussionist into something more edgy and forthright.

Famously walking out on the White Album sessions, the military influences to Ringo's fashion at this time could be seen as a subliminal message to the battle for the dictatorship within the band. Pea coats with army style pockets and shirts gave Ringo an almost socialist edge, as if he was Field General foreseeing the troubles and fractures ahead, in which inevitably he was proved right” For Paul McCartney a sense of tradition was the order of the day. His classic British tailored style of the late sixties seemed to be a nod to the early inversion of The Beatles, when grey and black Edwardian collarless suits had ushered in a new revolution of British pop music. In many ways he celebrated the idea of Englishness in this period too, with a nod to the early Mods, classic shapes and expensive cloth. Perhaps a late sixties Paul had had enough of the counter culture and hippy idealism, figuring whatever choppy waters lay ahead he was going to navigate them with a grand sense of elegance, forging ahead, as all the Beatles did, into new and exciting territories.

“In many ways Paul celebrated the idea of Englishness in this period too, with a nod to the early Mods, classic shapes and expensive cloth”