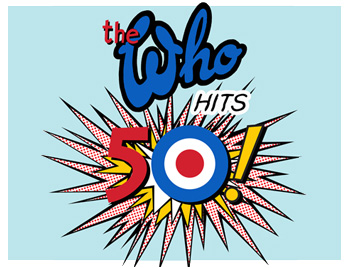 As a proud supporter of the Teenage Cancer Trust, we are pleased to offer a chance to win a pair of tickets to The Who Hits 50: an evening of Who music at the O2 Shepherds Bush Empire on Tuesday 11th November. The Who's band will be joined by other artists such as Pearl Jam's Eddie Vedder, Wilko Johnson, Liam Gallagher and many more who will all be performing Who classics they have chosen with 100% of proceeds going to charity.

Pretty Green has a long standing relationship with the Teenage Cancer Trust , in 2011 we designed and sold the Tambourine Limited edition T-shirt. The T-shirt was a huge success and Liam was delighted to personally present a cheque to the charity. We also produced the 'The White Guitar Collection’ our latest collaboration with Teenage Cancer Trust and Gorillaz artist Jamie Hewlett. Teenage Cancer Trust has been a cause that Liam has been involved with for a number of years and next Tuesday will see him taking to the stage again after previously performing at the concert in both Oasis and Beady Eye.

Competition ends Midnight on Thursday 6th and winners will be selected at random and announced at 10am on Friday 7th.

Terms & Conditions: We have only TWO PAIRS of tickets to give-away with the winners being announced on Friday 7th November via Twitter and Facebook. Please make sure you are available to attend the event at the O2 Shepherds Bush Empire in London on the evening of Tuesday 11th November. Transport and accommodation is not provided. The prize includes entry for two people (18 and over) to the Teenage Cancer trust gig only. Both winners will be contacted with the full details the prize nearer the time. Please note the prizes cannot be returned or exchanged. Pretty Green reserves the right to amend the terms and conditions of this competition at any time and to take appropriate action including cancellation of the competition if it deems such action necessary.