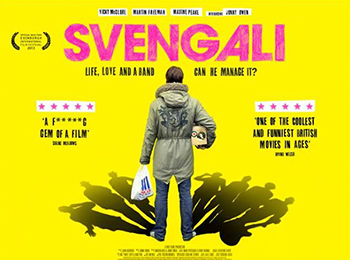 Svengali is a heart warming British film. It tells the story of a hapless but lovable Dixie (Jonny Owen). A dreamer and self proclaimed 'Mod' who's love for music drives him to London where he aspires to manage The Premature Congratulations. A young, arrogant rock and roll band he discovered on Youtube with volatile relationships.

Dixie and his girlfriend Michelle (Vicky McClure) move to the big city and soon face troubles both personal and professional. Rent prices, relationship dramas and the success of the band drive the normally happy-go-lucky Dixie to breaking point.

There are many comical moments to be enjoyed including cameos from Martin Freeman, Matt Berry, Katy Brand, Michael Smiley, Morwenna Banks and the legend that is Alan McGee. With such a great cast the film is guaranteed to entertain. Be prepared to laugh and maybe even shed a tear. Accompanied by an outstanding soundtrack this is a must see for any music enthusiast.

Out in cinemas from 21st March and due for DVD/Blu-ray release on April 7th 2014.