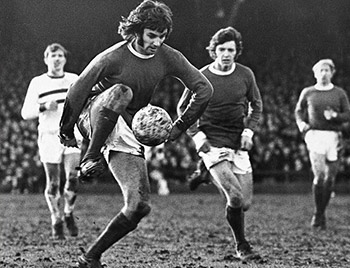 His 1239 career goals in 1329 matches was second only to Pele; he had a 25-year career and he was feted as the “King of Football” on Brazil's 1925 tour of Europe. Friedenriech – a mixed-race player who had to pretend to be “tanned” in order to participate in a game that was the preserve of the white upper classes – was the first true Brazilian superstar. But he wasn’t picked for the Selecao’s one World Cup game in 1930, and by 1934 he was just about to retire, aged 42.

The most decorated player in Manchester United history has won every trophy in the domestic game, but inspiring Wales to World Cup qualification has proved beyond the winger. Although he was raised in Manchester and played for England Schoolboys, Giggs was never eligible to play for the senior team. Nor did he want to: nothing rankles the proud Celt more than being questioned about why he “chose” to play for Wales…

The lynchpin of Real Madrid’s all-conquering ‘50s side played international football for his mother country Argentina (7 caps) and his adopted homes of Colombia (4 caps) and Spain (31 caps). Despite his generous approach, he was never quite in the right country at the right time to have a crack at adding the Jules Rimet Trophy to his numerous league and European titles.

Best was in his late thirties and unfit by the time Northern Ireland eventually qualified for the World Cup in 1982. International manager Billy Bingham took a look at Best in 1981 in the hope that the legendary forward could make a dramatic comeback in the green shirt, but concluded that the player – then at San Jose Earthquakes – was not up to it.

One of English and European football’s finest – and most decorated – goalkeepers, Ray Clemence’s international career was strangely desolate. His prime coincided with the national team’s failure to make the finals in 1974 and 1978, and although he traveled to Spain 1982, he had by then lost the gloves permanently to Peter Shilton.

Despite his creative brilliance, Ginola won only 17 caps for France, and was used as a scapegoat when the side failed to qualify for USA ‘94. During the final qualifying game against Bulgaria, Ginola gifted the ball to the opposition in the last minute. Emil Kostadinov scored; France lost 2-1 when a draw would have got them through. Manager Gerard Houllier branded Ginola’s action’s “a crime” afterwards, leading to a decade-long feud between player and boss. “I became public enemy number one,” Ginola said. “I can never forgive him.”

A former World, European and African Player of the Year, and widely rated the greatest African footballer of all time, it can’t be said that Weah didn’t try his best to get his homeland Liberia to the finals. He played for the team, he managed the team and he even helped to finance the team, but they always fell just short: in 2002 they missed out by just one point.

The highest scorer in Liverpool FC’s history and a key member of the Anfield side’s dominance of the English and European football, Rushie never made it to the biggest stage of all with Wales.

The Manchester United missed his best chance to play at the World Cup in 1994 as a result of the Ginola affair; they reportedly argued about it after the match. And following rumours that he would not be picked for the squad in 1998, Cantona retired from international football in 1997 in order to avoid putting pressure on French coach Aime Jacquet.

African Player of the Year in 1991, 1992 and 1993, the sublimely gifted attacking midfielder never got through to the World Cup with his native Ghana.

Voted the greatest player in Barcelona’s history in 1999, Kubala managed to play for Czechoslovakia, Hungary and Spain – he would insist “I am a citizen of the world” when quizzed about his loyalties – but never at the World Cup finals. He did take part in some of the qualifiers in 1962 for Spain, but got injured just before the tournament began. Kubala eventually made it to the tournament as Spain manager in 1978, however.