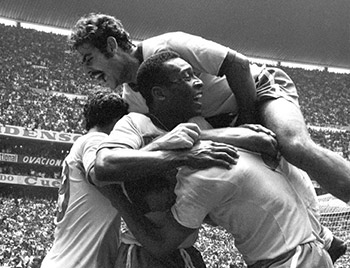 At 27, Juventus' Tardelli was arguably at the peak of his powers as he led his side to the World Cup trophy in Spain – even getting on the Azzurri scoresheet against West Germany in the final. Notching the second goal in the 69th minute of the game, the industrious midfielder turned and sprinted full pelt towards his bench, fists clenched, with tears in his eyes – a celebration which would later become known as the 'Tardelli cry'. Bellissimo.

Lining up against Bulgaria in their first ever appearance at the World Cup finals, Nigeria were not expected to make much of an impact in the USA – but a 3-0 victory announced their arrival on the global stage in some style. It was Vitoria Setubal's Rashidi Yekini who began the rout, pouncing on the end of a slide-rule cross to tap in a goal that even your gran could've scored, before throwing himself into the netting and thanking the heavens that he hadn't fluffed it.

The striker's three goals in the USA played a massive part in his Samba side securing the silverware – but it is his celebration against the Netherlands which made him a global household name some 20 years ago. Springing the Oranje offside trap, the nippy forward rounded Dutch stopper Ed de Goey before sliding the ball into an empty net – before paying tribute to his newborn son, Mattheus, with an imaginary baby cradle rock. That kid now plays for Flamengo, in the Brazilian top tier. Feel old yet?

The '38' year old's four goals at Italia 90 elevated him to cult-figure status, and helped Cameroon to become the first African nation to reach the quarter finals of the competition. It was a brace against Romania that cemented his place in World Cup history, though. Racing through into the box before rocketing a rasper in the roof of the net...twice, Milla then proceeded to jig a loose-hipped dance over by the corner flag.

The leggy holding midfielder announced his country's entrance onto the world stage in some style back in 2002, as his goal propelled The Lions to a surprise 1-0 victory over France in the opening fixture of the tournament. Later affectionately nicknamed 'The Wardrobe' by Fulham fans due to his large frame, the engine-stoker displayed surprising grace and elegance as he removed his jersey, before joining his teammates in a choreographed, circular dance routine around the garment; a sweaty, polyester shrine.

Not to be outdone by his Super Eagles teammate Rashidi Yekini, Ajax winger Finidi George made a dash for the corner flag following a gloriously deft chip against Greece, before dropping to all fours, walking several feet on his hands and knees, and cocking his leg to imitate a urinating dog. Was it a political statement? An ode to a long lost childhood pet back home? Or simply Fin marking his territory? No-one is quite sure exactly what message he was trying to convey, but either way, the celebration quickly made its way into football folklore.