The 10 Greatest Ever World Cup goals 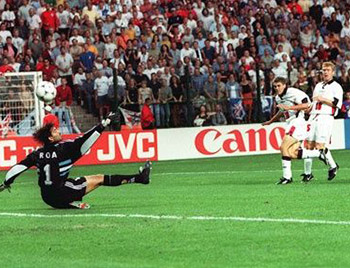 The World Cup isn’t known as the “Biggest Sporting Event In The World” for nothing. For a month, the world’s best teams compete for the ultimate sporting glory, and nothing else seems to matter. Goals always change games, but they are even more important on football’s biggest stage, where a single strike can transform the scorer’s career and uplift an entire nation. Here’s the 10 best goals ever seen at the World Cup...

The abiding memory of the Netherlands’ 2010 showing is Nigel De Jong’s kung-fu kick on Xabi Alonso in the final and Oranje master Johan Cruyff labelling his side's style “anti-football”. Not great, then. But it wasn’t all assault and aerial balls, as captain Gio van Bronckhurst arrowed a rocket into the roof of the net from about three miles out, setting his country on the way to their first final in over 30 years. Unstoppable.

There’s just so much to love about this goal, a sweeping move featuring a frankly ludicrous 24 passes. There’s the patience and fluid movement of the Argentinian side, Riquelme’s subtle flick to bypass the Serbian midfield, and Cambiasso subsequently celebrating like he’s actually won the World Cup, found a fiver AND bagged a supermodel, all in one afternoon. Maxi Rodriguez, Carlos Tevez, and Leo Messi all scored sweet goals in this game as well, but they were overshadowed by this move’s brilliance.

Scotland needed to beat the Dutch, who were favourites to lift the trophy, by three goals to get through their group at the ’78 tournament. After Archie Gemmill scored his wonder goal, it briefly seemed like anything was possible. Needless to say, the Scots ultimately fell short, but that strike will still be remembered for many years to come.

Saudi Arabia were relative World Cup minnows as they travelled to the USA in 1994, but no-one told Saeed Al-Owairan, who tore through the opposing Belgian defence, leaving five defenders in his wake with a lung-busting run from his own half.

Imagine playing for your country at 17. At the World Cup. In the final. And then doing this. Pelé was, and is, ridiculous.

England might have lost to Argentina, but a star was born that night in Saint-Étienne. Remember the first touch to open space, the searing pace to burst past the first defender, and the strength to hold him off? Course you do. Remember the body swerve to evade Roberto Ayala, Paul Scholes expecting a pass that never comes, and the ruthless finish into the top corner? Like it was yesterday. Remember the 18-year-old that “electrified the world”, and sadly, never reached those heights again? Oh.

Think of the Divine Ponytail's contributions to the World Cup and most people’s first thought will be his crucial penalty miss in the ’94 final shootout. That’s a real shame, because this goal is one of the best the trophy has ever seen. Picking up the ball in his own half, he plays a smart one-two to take a pair of defenders out of the game, skips past another, utterly bamboozles a fourth, and then sends the keeper the wrong way. It’s all too easy for the Italian star.

The Brazilian side of 1970 are regarded as one of the best ever, and this goal encapsulates all that was good about them - in one, slick single move. Leading 3-1 in the final with the clock running down, the ball is worked to Clodoaldo, who weaves in and out of four Italians as if they were training cones. A few quick passes later, Pelé receives the ball and pauses on the edge of the box, fully aware that Alberto will be charging up the right-wing. He rolls it into the full-back’s path, and World Cup glory is secured.

Great World Cup goals shouldn’t just be about their technical quality, but their significance as well. With a minute of normal time left, Frank de Boer lumped a long pass towards Dennis Bergkamp. As it flew through the air, Bergkamp was racing away from goal and a defender was in hot pursuit. The next three touches, in two quick seconds, saw Bergkamp became immortal. He killed the ball dead in mid-air, flicked it past his marker, and then caressed the ball home, sending the Dutch into delirium.

It had to be, didn’t it? During a five-minute spell in the ’86 Quarter-Final, we saw both sides of Diego Maradona. First, there was the infamous 'Hand of God' goal. Then, the little Argie showed just why he’s arguably the best player to ever kick a ball. He put his nation on his back and danced through one, two, three, four, five English defenders, and then shimmied around Peter Shilton in goal, before tucking away. A master at the peak of his powers.