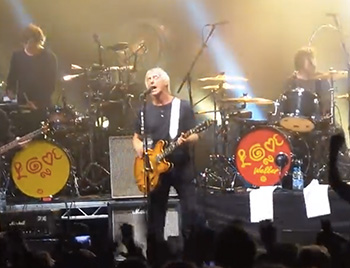 The beautiful and historic town of Warwick was buzzing with excitement as the 'Modfather' was set to perform in a few hours inside the grounds of the castle. The sun was shining, the drinks were flowing and like minded people from all walks of life were coming together in celebration of good music and the legacies of Mod ideals. As we walked along the high street you couldn't help but feel part of this unique event. Paul Weller brings in such a good crowd and mix of people. The gig didn't start til 7:30pm so everyone filled the pubs and bars, We managed to grab the last table outside in the town square. With a drink in hand the night had officially begun. We'd picked a great little spot, a young lad had pitched up outside busking with his guitar playing a veritable juke box of our favourites, from Weller himself through The Stone Roses to Oasis. Everyone was soaking up the atmosphere; dancing and singing and of course the day wouldn't be complete without witnessing a scooter rally in true mod style.

We entered the castle and made our way to the stage. With the The Gramotones supporting we needed to find our spot for the evening. They're a four piece from Oldham who are influenced by bands like The Hollies, Squeeze and The Beach Boys. They give a contemporary twist to the sounds of the 60's, accompanied by clever and well written lyrics. Having played in our stores The Gramotones are a Pretty Green favourite, and guess what.. they didn't disappoint!

It was time. The show had begun and people flocked from every area of the venue to the stage to embrace the Weller experience. He started with 'Sunflower' and 'Floorboards', moving between old and new tracks to create that perfect fusion of sounds. The show was truly awesome and one we felt truly privileged to have experienced, He went on to perform classics like 'You do something to me' and 'Start!'. I have to admit there was some truly awful dance moves on show and some shapes that should never have been thrown, but it didn't matter. Whether you were a romantic couple having a sing-a-long together, part of a larey group bouncing around or just chilling on the side-lines there was a warm feeling of camaraderie being enjoyed by everyone. The gig reached a crescendo with 'A Town called Malice' and the place erupted, drinks were spilled and chaos ensued. But that good kind of chaos, the sort that encourages everyone to let themselves go.

The gig had ended and although we would have loved an encore the incredible fireworks display helped to close off this spectacular event. Whether you preferred him as a member of 'The Jam' in the 70's and 80's 'The Style Council' or solo you have to admit that this guy is without a doubt one of Britain's greatest Rock and Roll talents and will forever remain a national figure of reverence for his music, his iconic style and for his sterling work in the greatmod revival.