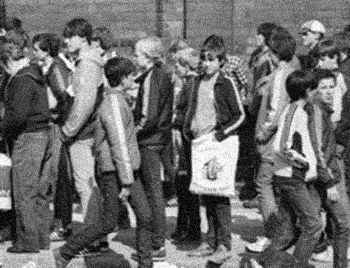 Football Casual culture is one engrained within us. No matter your age, if you've grown up in Britain over the past few decades you'll have been exposed to it in some way, whether first hand on a match day, or through the numerous films and books dedicated to the subject in recent years.

The argument as to where it all started has been raging on for longer than the chicken and the egg. Those North of the Watford Gap will tell you the thing we now know as 'Casual' began life as a Liverpool thing. Their North West rivals in Manchester will tell you their homegrown 'Perry Boys' were the trailblazers, while down South, the London dressers claim the look was merely a continuation of the Soul Boy scene. There's probably an element of truth to all their claims. First of all, rewind back to the seventies when football hooliganism was at epidemic levels, with beered up bovver boys in their overcoats terrorising the terraces, creating clashing stampedes of young working class frustration. It wasn't until a new generation of kids came along, peacocks dressed in sportswear and trainers with their hair grown out, that the thing we know as 'Casual' started to take shape. The way they looked, like a Grand Slam finalist fresh off of Centre Court, made them pretty much invisible to police on the hunt for traditional 'troublemakers' - the skinheads in red braces. Perfect for causing havoc in someone else's town on a Saturday afternoon.

The sportswear get-up soon took on around the country, with the likes of Liverpool and Aberdeen's success in Europe during the 80s meaning local lads could go on the rob across the continent at away games, kitting out their firms with gear that just simply wasn't available to your average chap back home. Exotic names like Lacoste, Fila, Diadora and Gabbicci, were disappearing off the shelves quicker than you could say 'jib'. The violence was still a major aspect of a match day, but out-dressing your opposing firm became another way to get one up on your rivals.