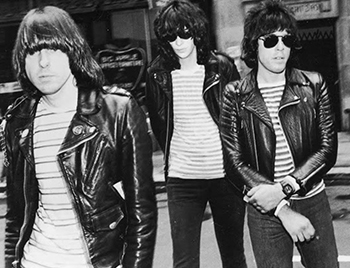 Since the 1950's the leather jacket has been the symbol of the rebellious attitude at the very heart of Rock and Roll. It somehow manages to convey an effect of both style and non-conformity simultaneously.

The versitility of this eclectic piece of menswear is apparent. Leather lends it self to an almost endless list of style options. Biker Jackets like the "Perfecto", the double breasted, cinched belt american biker, sported by Brando, The Ramones and The Clash. The collarless Italian Sports biker as worn by Liam and seen worn by Peter Fonda in the 1969 movie Easy Rider Leather Flying Jackets, Parkas, overcoats, the list goes on. Currently Leather Dispatch Rider jackets based on Military biker styles from the first and second world wars are becoming very cool (watch this space gang) The beauty of this type of leather is it can be worn both smart and rebel style.

By the way, if you've never purchased a leather jacket there is a certain thrill attached to whole transaction. As they do tend to cost considerably more that fabric jackets the decision process takes a little more deliberation than usual but as a result when you first step out wearing your leather jacket the feeling of "rightness", of panache and style and cool will outweigh almost every other piece of clothing you'll own and you will never tire of that feeling.