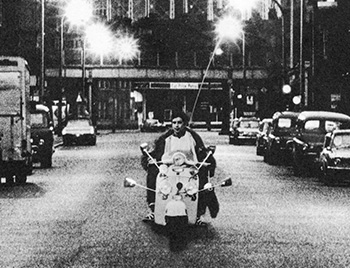 The scooter had first become vital as a way of travelling across war ravaged Europe from 1947. By the fifties however it had began to make inroads into modern culture, both in films and the way it was imported throughout the world. Both Vespa and Lambretta had already made inroads into the British market before the Mods latched on to it, making it as much an extension of their appearance as a mode of transport. Something to be customised and cherished. Ready to show off to the world.

Whilst the Mod movement was an underground one, there was always a sense of it being a celebration too - a celebration of fixing sharp as a Joe Public watched on. Hence the scooter rally was born. The scooter rally had actually began in Britain in the '50s but it was during the next decade that the mods really embraced the idea of travelling en masse to seaside towns around Britain, leading to infamous clashes with rival, more primal biker gangs simply known as 'Rockers'. Press hysteria ensued, painting the Mods as some sort of bespoke army - ironic given their choice of coat at the time. The iconic parka, which would become perhaps the most famous jacket of all time, began life as an American military coat during the Korean War. The M51, as it was known, was warm and cheap and widely available in military shops, and just like their scooters, the Mods took to customising it to their own specifications. The sight of the parka being flashed across the front pages across Britain gave it a nefarious edge; from one war to another. The Mods were now the most famous gang in Britain. By the late sixties however, whilst the Mod scene and reputation didn't disappear, it did dissipate from public view slightly. They had formed such an identity on modern culture that their clothes and style began to be imitated by fashion houses and newspapers looking to cash in on the scene. There was a sense that it was being commercialised and exploited. which were horrible phrases for them to endure. Even the so called 'Mod bands' retreated, heading into the realms of psychedelia, but crucially almost a decade later it would be through a new set of music revolutionaries that their spotlight would blaze loud and clear.