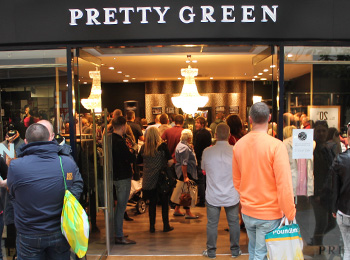 Thank you to everyone that visited a Pretty Green store and helped us celebrate the launch of our Autumn/Winter '14 collection last weekend. We hosted an event in eleven of our stores over Friday 29th and Saturday 30th August to toast the arrival of our new collection; customers were able to enjoy live music / DJ sets, drinks and engage with the staff about the new pieces. Customers also received a free '5th Anniversary' tote bag when purchasing on the night. It was great to see so many of our loyal tribe members making an appearance; sharing feedback and laughs with the staff and even advice to newer customers who were drawn in by the festivities and music.

On Saturday we were entertained by Former 'Broken Vinyl Club' member Scott Howells (Cardiff), Brighton Band 'The White Room' (Carnaby) and Rock'n'Roll band 'Pretty Cartel' (Belfast). Big sellers of the night were the Kingsway harrington and leopard print t-shirts. Big thank you to our tribe member DJ Ghost at our Belfast store for his continued support. We also had a quick chat with Shrewsbury Based Indie Rock Band Salopia who played at our Birmingham store:

If you could grab a pint with anybody who would it be with and why?
The Beatles because their an inspiration and have a big impact on our music.

What has been the best moment of your career to date?
That would have to be headlining the O2 Academy 3.

Who would you say is the best-dressed musician in rock and roll history?
Paul Weller and Liam Gallagher

Is the way you dress influenced by music?
Yes definitely.

The AW14 Black DB Bosworth peacoat was talked about as the must have from this season along with a love for the new paisley shirts and there was a definite divided opinion on the new Leopard print t-shirts.

We hope everyone who attended our Autumn/Winter '14 preview events in-store had an enjoyable evening and thank you for making the events a great success.

To see any future in-store events keep an eye out on our Facebook page.