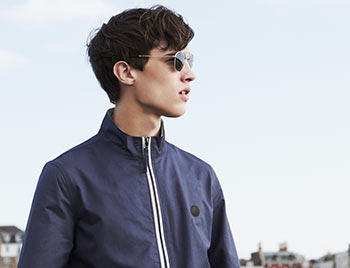 Welcome back our classic Monkey Jacket, a signature Pretty Green piece that has been reworked for SS15 in fresh new colourways. The Monkey Jacket is a slim fitting lightweight jacket, developed from the traditional windcheater worn originally by the likes of James Dean and Paul Newman.

Later adopted by skinheads in London in the 1970’s, the British Ska movement and songs such as ‘Monkey Man’ influenced our modern take on this quintessentially British design, resulting in the ‘Monkey Jacket’ we have today.

Available in Navy and Black.