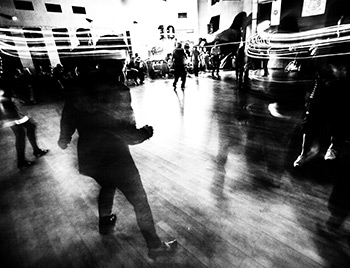 Northern Soul music reached its peak of popularity in the mid to late 1970’s, with soul clubs present in virtually every major town in the North and Midlands. Thousands of people visited dancehalls every week for regular all nighters, with some fans travelling from all over the country to hear and dance to the latest rare soul records.

We’ve rounded up three venues regarded as the most important of the Northern Soul Decade.


The first venue that’s commonly associated with the early development of the Northern Soul scene was Manchester’s Twisted Wheel Club. The venue, situated on Whitworth Street, was a converted warehouse, with a coffee/snack bar on the ground floor and a series of underground rooms in the cellar, with a back-lit iron wheel decorating the simple black brick walls.

The Twisted Wheel DJs were famous for importing large quantities of rare records from the United States, with some records having only been released in one city or state. Weekends were usually live music events, with resident DJ Bob Dee compiling and supervising the weekly playlist. Junior Walker, Edwin Starr, Ike and Tina Turner and Inez and Charlie Foxx were among the many musicians to squeeze onto the tiny stage at 2am during the regular all-night sessions held every Saturday.

The club shut down in early 1971 due to the reputation it had gained as a drug haven. But the popularity of the music and lifestyle had begun to spread across other areas of England, signifying the birth of new venues hosting their own soul-all nighters.


The best attended Northern Soul all-night venue at the beginning of the 1970’’s was The Torch in Tunstall, Stoke-on-Trent. The first all-nighter was on 11th March 1972 and proved a massive success, with events then running every week from 8pm Saturday to 8am Sunday. As there was no other competitor at the time the venue soon became the top venue in the country attracting DJs such as Tony Jebb and Ian Levine as well as live acts featuring on a regular basis. Artists who performed live included The Drifters, The Stylistics, Oscar Toney and Edwin Starr.

With regular police presence, drug taking and over crowding issues (with one night rumoring to have reached 1300 at this 500 capacity venue), the clubs renewal of a license was denied in March 1973 meaning the closure of the club.


Probably the most well-known Northern Soul dancehall and with a much larger capacity than many competing venues was the Wigan Casino. Wigan Casino opened its doors for its first ever Northern Soul all-nighter at 2am on Sunday 23rd September 1973, with DJ Russ Winstanley.

With a regular roster of DJs, Live performances and a membership of 100,000 the club went on to be voted the worlds number one discotheque by Billboard magazine- beating Studio 54 nightclub in New York City.

All-nighters would traditionally end with three songs, ‘Time Will Pass You By’ by Tobi Legend, ‘Long After Tonight Is All Over’ by Jimmy Radcliffe and ‘I’m On My Way’ by Dean Parrish, which became known as the ‘3 before 8.’

The club was closed on 6 December 1981 with a final all-nighter DJ’d by Winstanley. After the 3 before 8 were played 3 times consecutively in a row the crowd still refused to leave, so Winstanley chose a 7” at random to play. This final Wigan Casino song, Frank Wilson’s ‘Do I Love You (Indeed I Do)’ became one of the most famous northern soul songs of all time.

We’ve rounded up our favourites but we want to know your stories. Were you a regular on the dancefloor at Northern Soul all-nighters? What was your favourite club? What does Northern Soul mean to you? Send us your Northern Soul ‘All Nighter’ stories and we’ll give a £50 voucher to all the stories we publish.