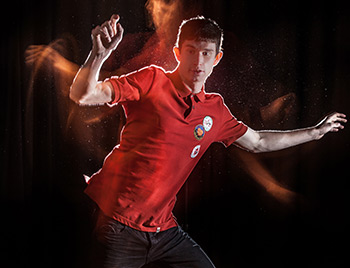 Our Capsule collection for Autumn Winter ’15 is inspired by the Northern Soul movement that emerged in Britain in the late 1960’s. Fueled by the upbeat sounds of Black American soul music and the fast tempo beats of Tamla Motown, the Northern Soul scene exploded with new dance moves and fashions.

Young Mod’s would travel from near and far to dancehalls like the Twisted Wheel, Golden Torch and Wigan Casino. Competition grew amongst DJ’s to find fresher more exciting tracks imported from the US.

A feel good, living for the weekend mentality was deeply rooted in Northern Soul, it was a moment of escapism and a time when the youth of Britain could forget the bleak day-to-day life and lose themselves in the chaos and the music.

Mod’s would customize their parkas in a tribal way, painting their city names and union jacks on the backs of their fishtail parkas as a statement of belonging and a sign of where they were from.

Mod’s in the 60s also adorned their parkas with woven and metal badges. We’ve designed our own commemorative woven badges this season in the style of the sew on patches created in the 60s by clubs such as Wigan Casino. These ‘soul symbols’ come packaged like the original ‘scooter stickers’ of that era.

A standout design is our own version of the ‘black power’ fist that became synonymous with the Northern Soul movement. We created a linear outline of Liam’s fist with the phrase ‘Pretty Green, Live Forever’ woven into the design.

Key pieces for Theme this season include a reverse Fair Isle crew neck with a pattern inspired by a jumper worn by Marvin Gaye back in the 70s.

Geometric print plays a big part in this collection with several designs developed from similar styles worn by soul and Motown artists in the late 60s.