The Beatles vs The Beach Boys 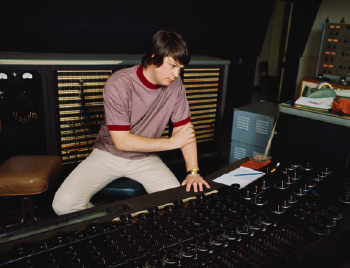 This seasons Black Label collection takes inspiration from the ‘British Invasion’ of British bands in 1960’s America and how these bands would take inspiration from each other to create much more richer and imaginative sounds. The rivalry between The Beatles and The Beach Boys is a main focus point for the collection, who with the release of various albums pushed each other to reinvent their music style in terms of innovation and experimentation, as well as the development of each bands fashion image.

The competition between the two bands started as far back as 1965, when the Beatles film ‘A Hard Days Night’, released in August 1964 was matched in March 1965 by the release of ‘The Beach Boys Today’. The Beach Boys film featured a number of Brian Wilson’s songs, such as ‘Help Me, Rhonda’ and ‘When I Grow Up (To Be A Man)’ The Beatles were listening to The Beach Boys music a lot during this time and this is said to have possibly inspired John Lennon’s title track on the Help! album. This was the start of the two bands competition but also growth and development in sound as they each tried to release songs which were better or more complex than the other.

The Beatles ‘Rubber Soul’ released in 1965, went on to be much more complex album than previously featuring a fuzz bass and sitar. Wilson claimed that the album ‘went together like no album ever made before’ and had ‘no poor tracks’ something unusual for an album at this time where albums were made up of mostly filler songs in order to sell singles at a higher price point.

Wilson’s answer to Rubber Soul came in 1966 with the release of The Beach Boys ‘Pet Sounds’. This album would come as a bombshell to the Beatles, with the tracks ‘Wouldn’t It Be Nice’ and ‘God Only Knows’ created using powerful instrumentation and harmonies, developing on the complex arrangements that The Beatles had used in the ‘Rubber Soul’ album. Paul McCartney has always said that this album was his favourite of all time, with ‘God Only Knows’ his favourite song.

‘It was Pet Sounds that blew me out of the water. I played it to John so much that it would be difficult for him to escape the influence.’ Paul Mccartney

When The Beatles released Revolver, it included several references to The Beach Boys, with similarities in the vocal style in songs such as ‘Good Day Sunshine’ and ‘For No One’. The Revolver album is regarded as their most complex album in compilation, which could be down to the inspiration they were getting from The Beach Boys.

The Beach Boys then went on to release the single ‘Good Vibrations’ in 1966, which went on to be a best seller in America, reaching number 1 in the Billboard charts.

The turning point came in the competition when later that year Wilson began work on Smile. Despite prints of the sleeves being made, Wilsons ongoing mental problems intervened and the album wasn’t completed.