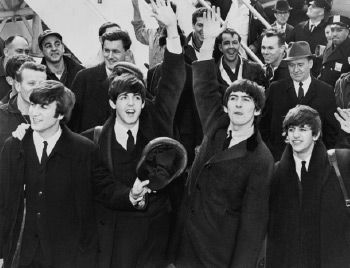 ‘The Beatles were perfect for opening doors… when they went to America they made it wide open for us. We could never have gone there without them.’ - Keith Richards

The Beatles wave to fans after arriving at Kennedy Airport.

On 9Th February 1964 The Beatles made their legendary first appearance on the Ed Sullivan show, with an overwhelming response of 73 million people tuning in to watch them perform. Record label executives began to take notice of the reaction to The Beatles and a British musical revolution was born.

But what about the other British bands and artists who were successful over seas?

One week after The Beatles entered the Hot 100 for the first time, Dusty Springfield became the next British act to reach the Hot 100 with ‘I Only Want To Be With You.’

The Dave Clark Five were another big hit overseas and a competitor to the Beatles, racking up 17 Top Forty hits between 1964 and 1967- more than the Rolling Stones or any other British act during that time period and giving the Beatles a run for their money. The bands single ‘ Glad All Over’ went on to knock ‘I Want To Hold Your Hand’ from the top of the British charts.

Following in the ranks were The Rolling Stones, representing an even more extreme Rock n Roll sound than the Beatles. The Stones had a delayed start in the U.S, not starting properly until the release of ‘(I Can’t Get No) Satisfaction.’ The band were famous for their scruffy, personalised look which was contrasting to the Beatles clean and polished appearance, putting the raw, tough edge back into Rock n Roll. The biggest difference between The Stones and the other British Invasion artists was the music with Brian Jones stating that the band ‘were the first to have a strong rhythm and blues influence. We haven’t adapted our music from a watered down music like white American rock ‘n’ roll.’

The Yardbirds were the band that inherited the Stones regular gig at London’s Crawdaddy Club. The Yardbirds were recognized for their instrumental guitar power- with guitarists such as Eric Clapton, Jeff Beck and Jimmy Page all famously being members. The Yardbirds success was propelled by the success of the film ‘Blowup’ which featured the Yardbirds performing ‘Train Kept A Rollin’ and guitarist Beck smashing up his guitar.

The Kinks and The Who were another two successful invasion bands, establishing themselves through the force of songwriting, with the Kinks Ray Davies showing a diversity in style with songs such as ‘You Really Got Me.’ The Who were also known for their anarchic stage prescence, smashing guitars, drums and equipment, proving successful as an outlet for the anger and rebellion of the American youth at the time.

The British Invasion reached its record peak in 1965 when fourteen records of British origin occupied the U.S Top Forty, a record which stood until 1983 until the second British Invasion led by Duran Duran, The Culture Club and The Police later landed eighteen hits in the charts.

It seemed that Rock n Roll filled a musical void in the U.S, the Beatles and the movement provided the youth with a fresh noise and style. The spirit and optimism of the fifties had gone since the assassination of President Kennedy, leaving the youth and public desperate to experience something other than the after-effects of the assassination; The British Invasion provided the key to this.

The Beatles vs The Beach Boys