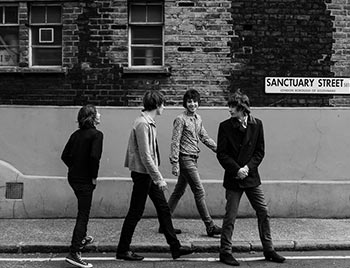 New British band ‘Hidden Charms’ feature as the soundtrack to our SS15 campaign video this season.

The band comprises of four Lads from London. Their first single, ‘Sunny Side’ produced by Nick Waterhouse received early radio support from BBC Introducing, Amazing Radio & Little Steven’s Garage. Loaded Magazine listed them as number 5 in their top 20 acts to watch out for in 2015.

They've toured the UK supporting the likes of Benjamin Booker, Razorlight, Kongos & July Talk. Shel Talmy, producer of The Kinks and The Who has just finished recording an EP with the band due for release later this year – exciting stuff!

"Hidden Charms have a giddy energy, a dancefloor frenzy which is more suited to legendary Mod club Tiles than any modern super-club. Yet this isn't some attempt to turn back the clock. Sure, the band are informed by the past but are confronting the present with the lyrics derived from the world around them" Clash Music

This mix of past influences with modern rock and roll references combined with the bands natural swagger make them a perfect fit for our Spring Summer campaign.

We look forward to seeing more from Hidden Charms