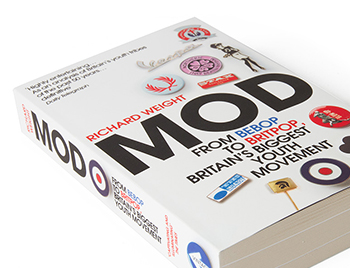 In Richard Weight’s new book he tells the story of Britain’s biggest and most influential youth cult. He charts the origins of Mod in the Soho jazz scene of the 1950s, set to the cool sounds of Charlie Parker and Miles Davis. He explores Mod’s heyday in Swinging London in the mid-60s – to a new soundtrack courtesy of the Small Faces, the Who and the Kinks. He takes us to the Mod–Rocker riots at Margate and Brighton, and into the world of fashion and design dominated by Twiggy, Mary Quant and Terence Conran.

But Mod did not end in the 1960s. Richard Weight not only brings us up to the cult’s revival in the late 70s – played out against its own soundtrack of Quadrophenia and the Jam – but reveals Mod to be the DNA of British youth culture, leaving its mark on glam and Northern Soul, punk and Two Tone, Britpop and rave.

This is the story of Britain’s biggest and brassiest youth movement – and of its legacy. Music, film, fashion, art, architecture and design – nothing was untouched by the eclectic, frenetic, irresistible energy of Mod.