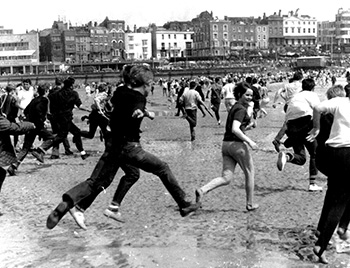 The Mods and the Rockers could never co-exist. Both were youth cults that could trace their spiritual lineage back to the Teddy Boys of the Fifties, but while the rockers had stylistically stayed in that decade, Mods were all about moving forward. In doing so, they set the style for the mid Sixties.

The Rockers had grown out of the ‘Ton-Up Boys’ - street motorbike racers who had lifted their look straight from Marlon Brando in ‘The Wild One’. More concerned with speed than fashion, their image was born out of biking necessity: black leather jacket with a silk scarf, jeans and heavy biker boots with long woollen socks pulled over the top, RAF style. They would hang out in transport cafes and listen to Gene Vincent, Billy Fury, Eddie Cochran and Link Wray, but speed was definitely their main interest.

The Rockers that followed were little different from the Ton-Up Boys, except their leather was dirtier and studded, and their devotion was now more slanted to Rock ’n’ Roll than to motorbikes.

In contrast, their scooter-riding rivals had evolved from the smartly tailored young fans of London’s modern jazz scene – hence the term ‘modernists’, or ‘Mods’. These switched-on teens lived for dancing and got off on sharp Ivy League fashions, as worn by their jazz heroes like Miles Davis and Art Blakey.

The look evolved, with the haircuts and clothes often influenced by the stars of French arthouse cinema, but Mods always remained smart, even when wearing casual Italian cycling styles. Likewise their soundtrack grew, encompassing a mixture of blues, soul and ska.

The Mods and Rockers were polar opposites but both were lifestyle choices running counter to the mainstream. For much of the early Sixties, the two cults co-existed and rarely came to blows until the national press whipped up a small clash in Clacton on the Easter weekend of 1964. This fuelled a bitter rivalry that came to a head over the bank holiday weekends of May and August of that year, when gangs of teenage Mods fought with Rockers in the coastal resorts of southern England.

The battles on the beaches may have been short-lived, but it has been the Mods that have won out in the long run. While the rockers morphed into the heavy metal greasers of the Seventies, and their look played its part in the development of the punk image and the psychobilly attitude, it has been the timeless quality of Modernist style that has had the greatest influence.

In the late Sixties the Mod lust for music and dancing gave birth to the Northern Soul scene in the northern outposts of England, while in the south the Skinheads and then the Suedeheads took elements of Mod style and created their own scenes.

Beyond that, Mod provided the template for many of the youth cults that were to come, with the sounds, styles and iconography proving to be a lasting inspiration. Whether it was the rare groove Mods of Acid Jazz, the 24-hour party outlook of baggy, or the parka-clad stylings of the Britpop generation, time and time again Mod has become the nation’s style of choice.