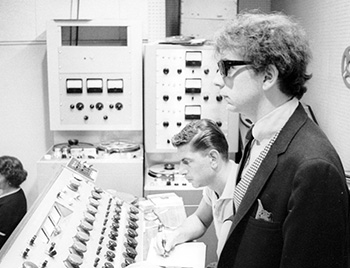 Our Spring Summer ‘15 Black Label campaign takes a look behind the curtain at some of the most influential creatives in the music industry over the last 50 years, the producers.

In the early 1960’s, recording studios were managed in a strictly corporate style. The engineers and producers were expected to wear either a suit or a lab coat when working. The recording studio environment was stuffy and rooted in its traditions.

Unbelievably, the musicians who recorded there were also expected to adhere to this formal dress code of suit and tie. Little did they know but this was about to change! The Beatles with their eclectic, bohemian style brought a fresh new approach to recording into the studio, becoming very involved in the production side themselves.

This was also true of bands like Pink Floyd, the Rolling Stones, The Who and The Kinks, all of which pushed the boundaries of what could be accomplished in the studio with an increasing involvement on the production side.

At the same time the role of the traditional producers was also developing. Record producers began to exert a strong influence, not only on careers but on the course of popular music itself. Producers like Phil Spector, George Martin, Andrew Oldham and Brian Wilson became known as innovators in their own right, turning the studio itself into a creative space.

In the spirit of music production, our Black Label collection this season has strong tailoring influences, with a rye nod back at the early days of ‘them’ and ‘us’.

Black Label Tailoring combines fine European fabrics and artisan craftsmanship with a superior attention to detail including oxidised side adjusters and natural Australian mother of pearl buttons with optic white engraving. Our suiting is crafted from the fine Vitale Lanificio Barberis, an Italian cloth with 100% cupro jacquard lining. The silhouette is a refined hybrid of contemporary tailoring with classic detailing, including prick stitching on the pocket flaps, lapel and collar with 15 inch hems for that authentic Mod look.

Throughout the collection geometric detail, sharp lines and tonal hues are complimented by printed shirts and optical jacquard blazers, mirroring the clash between corporate and hippy style. We’ve also developed a unique Persian print, inspired by the Persian rugs used for acoustic absorption in recording studios.

The collection features a selection of lightweight outerwear pieces, ideal for Spring, including a classic trench and graphic printed harrington. A statement piece this season is our engineered overcoat. This 400 grams, cashmere mix coat in a charcoal two tone design features a notch lapel and low breakpoint, the ideal piece to layer over a crisp printed shirt.

A staple piece is our Suede Bomber available in stone and navy. The soft suede in a classic slim fit is flattering and versatile. Also in suede the signature parka, available in Black with a deep hood and pockets. This item channels the oversized silhouette of the 90s brit pop era, re worked in luxury fabrics for our Black Label collection.