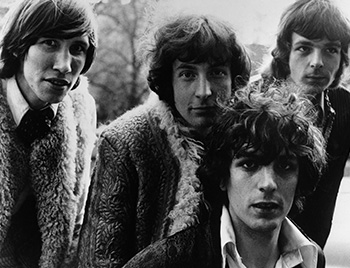 Our Spring Summer ’15 Theme collection is inspired by the ground breaking 1973 Pink Floyd album ‘Dark Side Of The Moon’ and it's striking album cover designed by Storm Thorgerson.

The now familiar image of prismatic colours against a solid black background is considered to be a design classic and we've been able to incorporate this iconic image into our capsule collection by using a rare and exclusive Liberty print created by Thorgerson himself.

The album itself was a world wide success and generated several of Pink Floyd's most enduring tracks, (Money, Breathe and the haunting Great Gig in the Sky, which features the incredible vocal skills of Clare Torry). It addressed themes central to the bands increasing disillusionment with modern life in general and the loss of founder member Syd Barrett and his descent into severe mental illness.

Barrett had written most of Pink Floyd's early material and was an innovative guitarist, experimenting with sonic distortion, looping, feedback and echo, creating a completely new sound. As Syd’s behaviour became more erratic the band decided to replace him, and one day in the car on the way to a gig they simply decided not to pick him up. Barrett's subsequent self imposed isolation had a profound effect on Waters song writing, particularly later, with the 1975 album ‘Wish You Were Here’. An affectionate and deliberate tribute to Barrett's creative genius.

Our SS15 capsule collection reflects on these themes of innovation and distortion. Thorgerson's psychedelic prints, his prism colours represented in bright jersey wear, the animal motifs, used here as prints and embroideries. The pig is a reference to Thorgerson's cover for Pink Floyd's later work Animals and the darker colour pallet we've used represent the themes and moods conveyed in the band's lyrics and music. The bird motif which features throughout on T-Shirts, Polo Shirts and Jackets, is taken from another of his cover art works and is a symbol both of freedom and of the fragile nature of the human mind and it's incredible powers of creativity.