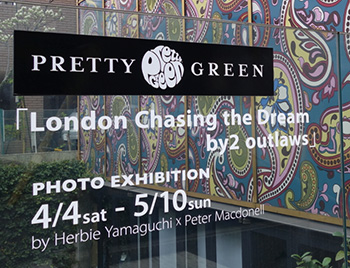 We are currently hosting an exhibition of the acclaimed Japanese photographer Herbie Yamaguchi’s work in our Aoyama store from 4th April – 10th May.

‘London Chasing the Dream by 2outlaws’ showcases work by Herbie Yamaguchi and his younger brother-in-law Peter Mcdonnell. We will host a special talk show with ‘Herbie Yamaguchi × Keisuke Baba (fashion producer)’ on the 24th of April in the store.

Two experts and old friends from different fields will talk about Fashion, Music, the City of London and the golden age of UK rock which has influenced many of the Pretty Green collections to date.

Born in Tokyo in 1950, Yamaguchi lay down the foundation to his career as a photographer during his decade-long stay in London starting in 1973. His photographs feature hundreds of people, from artists to everyday people and his style is well-known for its delicacy and naturalness. Today he is one of the most celebrated photographers in the world and has a global fan base.

He is also known for his essays, songwriting and appearances as a radio personality. He won the Lifetime Achievement Award category of the 2011 Photographic Society of Japan Awards.