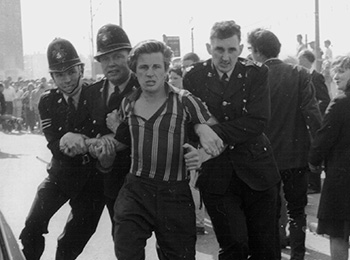 “I am a 17 year old Mod. Three years ago I barely knew what Mod was but from the first internet search I’ve been enthralled by the subculture. After watching Quadrophenia (at least three times) I picked up a copy of the ‘Mod Bible’ – Richard Barnes’s Mods! – and studied it to get a sense of the 1960’s style: desert boots, polos, a parka and then my first three button suit that was certainly unique at the school prom!

For me, there is no contest between the effortless smartness of Mod and the general scruffiness of today’s fashions. People may say it’s looking into the past but, like the principles of the ideology itself, Mod is always about forward thinking and aspiration. And unlike today, there’s no rule book as to what you can wear. Before I was shy, but Mod has given me a reason have self confidence in not just my style but an all-round attitude.

And regardless of whether the 1960’s stories were exaggerated or not, I admire the sense of comradeship between people who have the same principles of style and music. People at school may look at me with confusion at the mention of Mod, the title of my school project or a listen to my music, but I guess that’s what it’s about – being different. Even if the Mod scene isn’t quite as alive as in the past, I love the idea of flying the flag of a subculture engrained in the British psyche.”