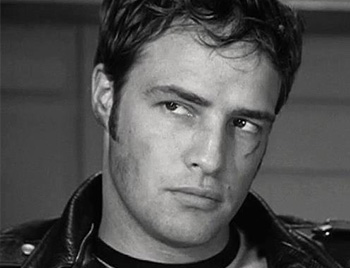 1. Marlon Brando
In the 1953 movie ‘The Wild One’, when Marlon Brando's leather-clad biker Johnny Strabler is asked “What are you rebelling against?”, he sneers “Waddaya got?”. Here was the look and the attitude of the Rocker.

2. Gene Vincent
A true quiffed rocker, the switchblade-carrying Vincent looked moody and menacing in black leather, while his pronounced limp was the result of crashing his Triumph motorcycle in 1955.

3. Link Wray
His intimidating guitar style and two-tone leather jacket made him a favourite with British Rockers, while his 1958 instrumental ‘Rumble’ was banned for its violent imagery, despite having no lyrics.

4. Elvis Presley
His delinquent rock’n’roll attitude, his love of motorbikes and his black leather look borrowed from ‘The Wild One’ made the young Elvis an obvious icon for British Rockers.

5. Eddie Cochran
A raw and exciting rock’n’roller with a rebellious image and a penchant for leather biker jeans, Cochran was an idol for the early Rockers.

6. James Dean
The ‘Rebel Without A Cause’ stance and denim look appealed to the Rockers, but Jimmy Dean was also a leather-jacketed motorbike-riding speed freak away from the cameras too.

7. Billy Fury
Mean and moody British rocker Billy Fury was dubbed Britain's Elvis Presley with his first album ‘The Sound Of Fury’ in 1960.

8. Debbie Harry
Frontwoman of Blondie and 70s fashionista, her blonde hair and cool attitude made her an instant punk rock icon

9. Johnny Kidd
The leather-waistcoat pirate image and eyepatch reeked of novelty, but ‘Shakin’ All Over’ made Johnny Kidd a favourite with the Rockers at the Ace Cafe.

10. Vince Taylor
Dressed from head to toe in black leather, this unpredictable British rock’n’roller had the look. The first singer to get arrested for carrying a knuckleduster, he had the attitude too.