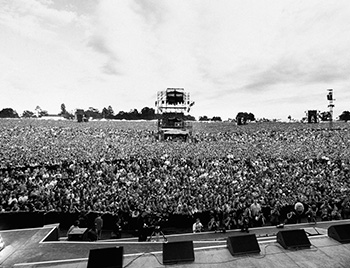 With The Who and Paul Weller announced as the names to bring down the curtain on this year’s Glastonbury, it's time to look back on the best festival years of the last decade…

After eight and half minutes the final chords rang out, and instead of waiting for the next tune 100,000 voices sang back Graham Coxon’s iconic ‘oh my baby, oh my baby, oh my, oh why’ refrain. Damon Albarn took a seat at stage right and wept. So did you, probably.

You go and build yourself a bleedin’ great stage in the middle of a lake. You build it in the shape of an intricately designed pirate ship. You book Faithless and 2 Many DJs to play the Saturday night at your festival. What do you then do? Well, if you’re Secret Garden Party you go and burn the ship down, completely upstage the two acts mentioned, and carve yourself an indelible mark in UK festival history. Genius.

Step on it, electronic…August 2010 saw Leicester’s sharpest Kasabian step up for their major festival headlining debut. Since then they’ve taken on V, Reading, Glastonbury and conquered all.

They say you can’t raise the dead, but on the sands of Coachella 2012 we got the closest thing to a resurrection since Lazarus. Snoop Dogg had already drawled his way through a set of hits, when without warning he welcomed a topless, hologram Tupac onto the stage for performances of ‘Hail Mary’ and ‘2 Of America’z Most Wanted’.

Let’s say you are the sort of music fan, who when quizzed as to the breadth of their musical tastes, will drop that old, timeworn classic: “wellll, you know, I like a bit of everything really. Other than heavy metal.”

If that be the case, then it’s quite possible that Isle Of Wight 2010 had the best headliner line-up ever: you had your Jay-Z, your Strokes, the most influential rapper of a generation, the most influential band. Not a bad way to start. Who’s that to play out the Sunday, you say? The guy who’s going to play the best songs by the best band to ever tread the hills of our mortal coil? McCartney, first name Paul. Have that.

2008 saw Bestival hit by a torrent of bad weather that necessitated the closing of its BBC Introducing stage, whilst the ground took on an appearance closer to Dairy Milk bath than sun-gorged field.

2005 saw V Festival celebrate 10 years at the top, with a line-up that straddled its 90s origins (Oasis, The Prodigy, Ian Brown) and the best of 2005 (Franz Ferdinand, The Streets, Doves). Even managed to get The La’s up there. Class.

2006 was a victorious year for the vaguely-bookish music fan, with both End Of The Road and Latitude having successful opening years. From the offset, E.O.T.R was suited to the beard-strung noodler with a penchant for heartbreak, whilst Latitude hung a little closer to the centre.

Over 50 years since the release of the Rolling Stones’ first single “Come On”, the band finally had the opportunity to hip-wiggle across the world’s greatest stage. They drew the biggest crowd since forever, with conservative estimates reckoning 100,000 people were there to see “Gimme Shelter”, “Wild Horses” and an emotional reunion for former guitarist Mick Taylor. Message to Michael Eavis: can we have them every year?

To say it had been a tempestuous time getting The Libertines back onstage is to paint precisely 10% of the picture. After nearly six years apart the band glued a hundred indie hearts back together, then blew the boards of the main stages apart. And they weren’t even headlining.