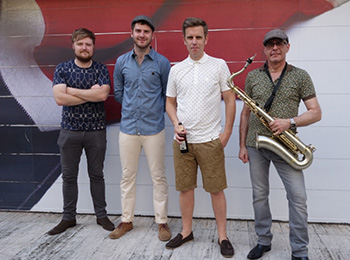 Stone Foundation are a British rock ‘n’ soul band, born from two men’s search for a new creative outlet and a new challenge.

In 2011, the band were spotted by Specials drummer John Bradbury who then invited the band to support them on their arena tour around the U.K, playing to audiences of 8,000 and giving them the break they needed.

Their breakthrough album ‘To Find The Spirit’ broke into the top 75 of the national chart despite being a DIY album and having no involvement from record labels or management- pretty impressive!

The band were recently invited to Japan for a ‘visit Britain’ campaign in which Japanese citizens were encouraged to tour the heritage of the U.K. This trip resulted in their slot at the prestigious Fuji Rocks festival last weekend- and also led to a record deal with leading independent label P Vine.

During their visit to Japan, Stone Foundation played an exclusive gig in our Aoyama store as part of Pretty Green Presents Japan.

The upcoming and strongest Stone Foundation album to date ‘A Life Unlimited’ features Graham Parker and Doctor Robert frontman of the Blow Monkey and has been labelled responsible for catapulting the bands name, leading to a staggering amount of media attention recently.

The band plays a run of U.K tour dates, with next show on the 18th September at Cluny in Newcastle-Upon-Tyne.

The new ‘ A Life Unlimited album’ is available to preorder now >